LatinaLista — It is estimated that there are more than 214 million migrants in the world today. Because of war and a poor economy, more people are being forced from their homes in search of safety or employment. Unfortunately, because the majority of the world is under the same threat of unemployment and low wages, many migrants don’t exactly get the Welcome mat in their new countries.

In Eurozone countries like Greece and Spain, where the citizens are enduring high unemployment, personal bankruptcies and committing suicide in higher numbers, migrants are seen more as an economic threat than contributors to those countries’ economies.

For example, in Greece, there has been a rise in violence against immigrants with local police reported to be looking the other way. And once the immigrants are in detention facilities, the United Nations is reporting that whole families of immigrants, children included, are being subjected to deplorable conditions.

Also, because of poor conditions globally, more migrants are bypassing legal channels to enter countries without the proper paperwork. New data shows that Great Britain now has the highest undocumented immigrant population in all of Europe. 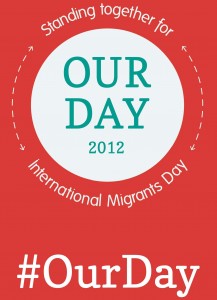 The country could be home to almost 900,000 “irregular migrants”, expert studies show.
The alarming figure is 400,000 more than second-place Italy and means the UK houses nearly one in four of the EU’s unauthorised population.

Yet, their lack of legal status prevents them from being able to fully contribute to the country and until immigration reform is passed, the country will continue to lose out economically from migrant consumers.

So, on this 12th International Migrants Day, on which migrants around the world are showing that lines drawn on a map will not stop them from seeking better and safer homes for themselves and their families, it’s perhaps time to re-think migration, national boundaries and international responsibility for when people are forced from their countries, whether it be by Mother Nature or their fellow man.