Is New Mexico Gov. Susana Martinez the next Sarah Palin?

LatinaLista — The notion that the nation’s first Latina governor would have anything in common with Alaska’s former governor, aside from party affiliation, would never even occur to most people. 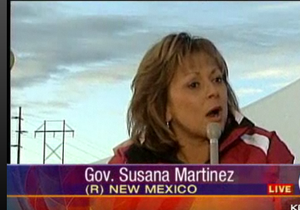 Yet, the two women do have some things in common. For example, both know how to promote their causes.

For Martinez, it’s promoting the traditional Republican platform that includes anti-immigrant components — she crusaded to overturn allowing undocumented immigrants to receive driver’s licenses — and she vetoed her legislators’ redistricting map saying it favored too much the Democrats.

For Palin, well, her cause is herself. Enough said.

And though both women serve(d) as governor of their state, it seems that Martinez has no aspirations (at the moment) to run for any higher office.

When asked by a local news station, during her first-ever visit to Albuquerque’s famous balloon festival, if she had plans to accept any VP position on a GOP ticket, the governor said:

“No, I won’t be doing it and this is why; the reason is I ran for governor. I gave a promise to the people of New Mexico that I would be the governor for the next four years. We have an agenda. We’re going to make sure that we’re going to take care of business,” Martinez said. “We have to do this right. I can’t do this for a few months and then take on to another path.”

Maybe that’s the biggest difference between Martinez and Palin — finishing a job she was elected to do.

One can only hope that the bright lights of the national political stage won’t seduce her as easily as it did Palin. While it’s important for women to aspire and run for national offices, it’s equally important that these same women politicians finish the work they were elected to do to show a track record that illustrates they not only can get the job done but they remember the real reason why they’re in office — public service.