Lack of Latino talent on Sunday morning talk begs the question: Do networks think Latinos are a passing political fad?

LatinaLista — Up until 2006, it was an ultra-rare occurrence for the Latina or Latino political perspective to be included on any of the Sunday morning talk shows. If it did occur, it was the same count-on-one-hand voices and faces that had been around the Beltway. It wasn’t until more of us started blogging about the 2008 Hispanic vote did the field open up and a more diversified group of speakers got on the radar of the cable networks. 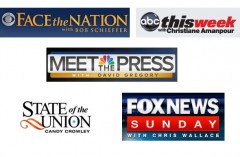 CNN was one of the first networks to take notice that Latinos/Latinas could speak on political issues and did invite a number of Latino/Latina bloggers (myself included) to share our perspectives. Unfortunately, the hope for change we envisioned happening at other networks during this promising time, when it seemed no news outlet could get enough of the Latina/Latino voice, disappeared as quickly as the economy sank.

As soon as Obama was elected, it became very clear to most Latino/Latina contributors that we had had our 15 minutes in the spotlight. Over the years since then, the major networks showed very little interest in including the Latino/Latina perspective in front of the camera on Sunday mornings. In fact, we still have to look towards the cable news networks for a sign, dim as it may be, that the Latino/a perspective is still appreciated — even in an election year.

A recent study released by the National Hispanic Foundation for the Arts (NHFA) underscored just how dismal Latino/a representation is on Sunday mornings these days. Titled The Art of Politics Impact Project, the report’s authors reviewed 149 broadcasts over 9 months. They found that “only 10 Latino men were invited as guests and commentators. Most of them appeared more than once and some were invited both as guest and commentator. The individual breakdown by show is as follows: ABC’s This Week included 5 Latinos; CBS’s Face the Nation (1) had 2; FOX News Sunday had 4; and NBC’s Meet The Press had 7.”

This sad reflection of how networks view the Latino demographic is proof that mainstream media regards Latinos more as a passing political fad, like the Tea Party, rather than a solid constituency that is only growing in numbers and influence.

This opinion was reinforced during one of the GOP presidential debates hosted by NBC news. When it came time to ask the candidates about their stances on immigration, the network trotted out their Telemundo (NBC’s sister network) anchor to ask the obligatory “Hispanic” question. After the candidates answered, the same anchor was ushered off stage before the next round of questioning commenced.

Relegating Latino talent to only issues deemed “Hispanic” not only does a disservice to the national viewership but it sends a damaging message to Latino viewers of all ages, insults the intelligence and capability of Latino talent and discourages Latinos from adding their voices to the national dialogue.

Also, the fact that this study focused only on Latinos reinforces the perception that Latinas are not as concerned or can speak intelligently about national or world affairs — a completely insulting falsehood.

But we all do have an opinion and can speak to it.