LatinaLista — State lawmakers across the nation, led by conservatives, have prioritized passing punitive legislation targeting undocumented immigrants to the detriment of the nation’s economic health. 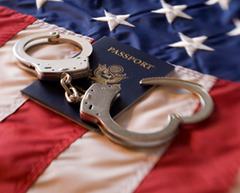 In the report, “2011 Immigration-Related Laws and Resolutions in the States” published by the National Conference of State Legislatures, “state legislatures enacted 151 laws and adopted 95 resolutions for a total of 246 actions as of June 30, 2011. Twelve additional bills passed but were vetoed by governors. An additional 10 bills were pending governors’ approval and are not included in this report of enacted laws.”

These new laws are doing nothing to keep the country, or the states safe, but are doing a helluva lot to endanger the future of the country.

For example, one orange grower in Florida almost didn’t get his crop picked. He finally did but said it took much longer than usual because there seemed to be 25 percent less Latino laborers.

Growers from Florida to California to throughout the Midwest are blaming shortsighted state immigration bills for wreaking havoc on the agricultural industry in this fragile economy.

State legislators supporting these bills just don’t get it — and neither does it seem the Obama administration.

Late last week, the Department of Homeland Security issued a release saying that it was mandatory that all states participate in a program known as Secure Communities. States had been under the impression that participation was voluntary.

On the surface, the program seems ideal — deport those undocumented immigrants who have a history of criminal behavior like rape, robbery, drug trafficking, etc.

But that’s not the way the program has been implemented. In the words of one Florida observer:

“There has been a decline of Mexicans coming here,” she said.

She’s heard there are more getting deported.

“Six to 10 years ago, they would not deport you unless you got into trouble or had a felony,” she said. Now, it appears all undocumented workers who get caught get sent home, she said.

The indiscriminate deportation of otherwise hardworking immigrants, with no criminal history, has contributed to the Obama administration’s record-breaker of deporting the most immigrants of any administration.

Making it mandatory for communities to participate in a program which several state governors, chiefs of police and numerous community leaders have condemned as targeting the wrong people, erasing inroads local law enforcement had with immigrant communities and causing a level of mistrust among immigrants with law enforcement is as shortsighted as the 246 immigration actions passed by state legislatures.

What is equally troubling is that a country that already is the global leader of jailing people — “The United States is the world’s leader in incarceration with 2.3 million people currently in the nation’s prisons or jails — a 500% increase over the past thirty years” — would have to build more prisons to hold the undocumented who are caught up in inevitable immigration sweeps once Secure Communities becomes mandatory for all states.

One such prison is in Florida:

A site being considered about 30 miles north of Miami would house about 1,800 prisoners, making it one of the nation’s biggest detention centers for illegal immigrants.

It’s disappointing news that clearly shows Latino voters didn’t get the change they voted for — they just got more of the same, and worse.

Previous Post Guest Voz: DREAM Act a Win-Win -- Good for Immigrant Women and Families and Good for Economy
Next PostState legislators hear about the vital importance of an educated Latino workforce at annual summit

Guest Voz: DREAM Act a Win-Win -- Good for Immigrant Women and Families and Good for Economy
Comment
State legislators hear about the vital importance of an educated Latino workforce at annual summit