Latino Congressman explains to Europe why he’s unhappy with Obama

LatinaLista — Rep. Luis Gutierrez from Chicago has been labeled a “thorn” in President Obama’s side when it comes to trying to convince the president to use his executive powers to relieve the agony of deportations inflicted upon undocumented Latino families. 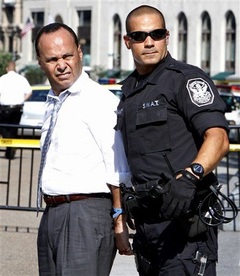 At first thought, one would wonder why Europeans would care about our immigration problems when they have the same problem plus many more pressing problems. Yet, for anyone who has traveled in Europe or read European newspapers, Europe cares A LOT about what happens in the United States.

That was never so clear than when President Obama was awarded the Noble Peace Prize in 2009 for doing nothing more than being elected.

Rep. Gutierrez, and others in the Latino community, are still waiting for President Obama to earn that prize here at home.
(Editor’s note: The following commentary by Rep. Luis Gutierrez was originally published for England’s The Guardian newspaper.)

One by one, those sitting in front of the banner were led away with hands cuffed to a police van and taken into custody. I was released with the others a short time later, after paying a fine and being processed, but it is not every day or every month that a US congressman is arrested for protesting outside the White House, especially one from the president’s own party, state, and city.

To understand why I chose to participate with others in an act of peaceful civil disobedience over President Obama’s record-setting pace of immigrant deportations, you need to go back to 12 July 2008.

In San Diego, then Senator – and Democratic candidate for president – Barack Obama spoke to the annual national conference of the National Council of La Raza (NCLR), the nation’s largest Latino civil rights organisation. He told the mostly Latino audience:

When communities are terrorised by ICE immigration raids, when nursing mothers are torn from their babies, when children come home from school to find their parents missing, when people are detained without access to legal counsel, when all that is happening, the system just isn’t working and we need to change it.

He received thunderous applause and went on to promise to address immigration reform to protect immigrants from deportation in his first year in office, and pledged he would not walk away even if it was politically difficult to keep moving forward.

He won the election with an overwhelming and unprecedented 67% of the Latino vote – which had expanded by 2 million new voters since 2004 – and won key states like Florida, Colorado, New Mexico and Nevada (and, therefore, the White House) on the strength of the Latino vote.

Indeed, the slogan adopted by his campaign, “Yes We Can”, is an adaptation of the iconic chant of the Mexican American farm labor movement of the 1960s, “Si Se Puede,” led by César Chávez.

Flash forward to now and Barack Obama’s record on immigration as president does not match the rhetoric or the huge expectations he created in 2008. A million people have been deported by President Obama – approximately, 1,100 per day; most of them Latinos – far more than his predecessor George W Bush or any American president.

Without being prodded by Congress, he expanded the use of the military at the border with Mexico, mandated the use of an electronic employment eligibility system for all firms doing business with the government and, most controversially, expanded a programme misnamed “secure communities” that enlists state and local law enforcement in federal immigration matters.

Such programmes erode trust between immigrants and their local police because reporting a crime or domestic abuse could lead to deportation (which has, indeed, happened). When the governors of New York, Massachusetts and Obama’s own State of Illinois – solidly Democratic Obama territory – tried to withdraw from the program, the president told them participation by their states, counties and cities is mandatory.

Fully 62% of Latinos in America say they know someone who has been deported or could be deported under current law, according to polls. And when 1 million people are deported, those around them tend to notice and tend to demand change, which is happening in Latino and immigrant communities across the country.

The president argues that he is sworn to enforce the current law and it is up to Congress to change the law and up to activists to build the movement that will get Republicans to join Democrats to pass legislation.

While true, this ignores the fact that the president has extraordinary powers under current law to temporarily spare families and individuals with deep roots in the US from deportation, while targeting resources at deporting criminals, security threats and other menaces.

When President Obama addressed this year’s annual convention of the National Council of La Raza on Monday 25 July, he tried to make the case that his hands are tied with regard to deportations and that he cannot change things unilaterally. He was interrupted this time by chants of “Yes You Can,” an ironic twist on his 2008 campaign slogan.

So, the next day, I participated in a demonstration in front of the White House to mark 1m deportations and echo the message to the president that “Yes You Can” do something to prevent the needless deportations that are breaking up families.

This followed a letter, released to reporters by the White House, from four members of Congress, including myself and John Lewis from Atlanta, who was an original “Freedom Rider” who helped desegregate the south in the 1960s.

The president responded in a letter, also released by the White House, that he would not change his deportation policies, and then reinforced that message with his NCLR speech last Monday.

I and others who feel the current escalation of deportations is unacceptable were left with no choice but to escalate our objection to the president’s actions (and inactions) with civil disobedience.

I am a strong supporter of President Obama and was the first national Hispanic elected official to endorse him, and I want him to be reelected in 2012. But the deportation policies Senator Obama described as “terrorising communities” have not changed significantly ,and I cannot sit quietly and wait for President Obama to act while communities are still under siege.

President Obama must utilise the powers he has under the law – and I will keep reminding him until he does.