Latina Lista: News from the Latinx perspective > Palabra Final > Immigration > Latino GOP group gets no response from message to GOP women’s org not to host speaker from recognized hate group

LatinaLista — Since 2007, many young and new Latino voters have, from time to time, written into Latina Lista to ask how I could publish the viewpoints and stories of Latinos who self-identify as Republicans. It’s a natural question from those newly engaged in the nation’s civic process, especially the young. 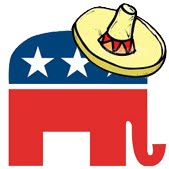 It has to be remembered that this generation of voters have only known a two-party system where one party has denigrated and insulted their family members and friends who may be undocumented with hateful rhetoric or have served as the main authors of racial profiling bills and anti-immigrant legislation.

The sincere bewilderment from these readers was how could Latinos who belonged to the GOP stand by and do or say nothing while members of their own party spoke so insultingly about people that at the most shared, to some degree, their cultural heritage, regardless of how many generations they’ve lived in the country.

It was a fair question.

It wasn’t long before some Latinos, proud to share the GOP culture of entrepreneurship, self-reliance and conservative values, found they couldn’t tolerate any longer their party’s leadership when it came to talking about undocumented immigrants, the DREAM Act or immigration reform.

The first news of a public rift among Latino Republicans and the GOP leadership was the national launch of Somos Republicans.

Their Mission Statement read: The Mission of Somos Republicans is to promote political education and information needed to make more informed political decisions. To inspire the Hispanic people to make a difference in their lives and the lives of their neighbors through collaborative political education, volunteer commitment and responsible participation in society.

Somos Republicans quickly got on the national radar by openly challenging and chastising the GOP leadership over their support of anti-immigrant legislation being passed in state legislatures across the country.

Another group that is getting increasingly vocal about how their party’s leadership is treating Latino immigrants is a Minnesota group calling themselves Cafe Con Leche Republicans. Their tagline is: Republicans for an America that welcomes immigrants

Fed up with current GOP practices, like their Somos Republicans counterparts, Cafe Con Leche Republicans is taking on the GOP establishment. Their latest effort is to get the Republican Business & Professional Women of Omaha, Nebraska to cancel their speaker tonight for a dinner the group is hosting.

The speaker, Susan Smith, is president of the Nebraskans Advisory Group on Illegal Immigration, the Nebraska affiliate of the Federation of Americans for Immigration Reform or better known as FAIR. FAIR is identified by the Southern Poverty Law Center as an official hate group.

According to an email released by Cafe Con Leche Republicans:

We have reviewed a wealth of evidence about FAIR’s agenda and leadership, and concur with the hate group designations of FAIR, though we take issue with any characterization of FAIR as a conservative group, as their leadership and positions are liberal/progressives focused on population reduction and environmental issues.

For the same reasons GOP groups do not invite the Ku Klux Klan or Nazi leaders to speak at GOP functions, GOP groups should not lend credibility to FAIR either. Allowing a hate group to speak at a GOP function is like letting the fox into the hen coup. We understand that FAIR often misrepresents itself as a mainstream, even conservative group, and many good conservatives have been hoodwinked by FAIR. We first sent e-mails to the President of Republican Business & Professional Women, explaining our concerns about FAIR, and then an open letter posted on our web site, to no avail. We’re dismayed at the complete lack of a response and apparently our urging has been ignored.
http://cafeconlecherepublicans.com/an-open-letter-to-the-republican-business-professional-women

We have not received any response from the Republican Business & Professional Women despite multiple e-mails and a Facebook private message, and it is our understanding that FAIR’s representative will be addressing this group tonight in Omaha. Details of tonight’s function:
http://republicanbpw.blogspot.com/

The lack of response from the Republican Business & Professional Women of Omaha, Nebraska is indicative of how the GOP, within its own party, has treated Latinos but it’s admirable that Latino Republicans are starting to create their own demands to be heard.

In the process, the new generation of Latino voters are learning a valuable lesson — Latinos can be of any party but must stand up, fight and make a lot of noise for respect, consideration and inclusion if things are to change for the better.

Previous Post Report cites future source of growth for military recruits can only be found among immigrant population
Next PostThe Coyote: The real reason for the decrease in apprehending undocumented immigrants at the border

Report cites future source of growth for military recruits can only be found among immigrant population
2 Comments
The Coyote: The real reason for the decrease in apprehending undocumented immigrants at the border