Low-wage job growth bad thing for Latinos and the nation

LatinaLista — When it comes to the low-skilled labor market, it’s been immigrant and minority workers who have served as the backbone in those industries. Yet, there was a time when a low-wage job was considered to be a stepping stone to better paying jobs on the way to achieving the proverbial American Dream. 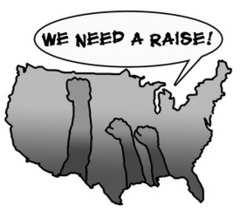 Yet, today’s job market seems to be building upon a foundation of low-wage employment. It doesn’t help our economy in the long-run, but most importantly, it doesn’t help people of color who want to break the cycle of poverty in their families.

It’s no surprise that minimum wage jobs just don’t cut it in any economy, especially in today’s seismic market. With prices rising on a daily basis wherever we turn, people earning minimum wage quickly learn they can’t have it all.

A new analysis released today shows just how bad it is for Michigan families who depend on jobs paying $7.40/hr (Federal Minimum Wage is $7.25/hr). According to the analysis, The Basic Economic Security Tables for Michigan, published by Wider Opportunities for Women, people who only earn minimum wage can never make enough just to pay for their basic needs like rent, utilities, food and transportation.

Forget about going to the movies or out to eat at a nice restaurant. It would take working two jobs at minimum wage to afford those luxuries, if even then.

And a single adult in Michigan with no children doesn’t get a break either. He/She still needs to earn at least $12.24/hr just to make ends meet, and that’s only if they have employer benefits.

The report goes on to say that without policy changes things aren’t going to get any better for Michiganders since job growth in the state is going to be concentrated in low-wage jobs that don’t require college degrees or specific skillsets — retail salespeople, home health aides and food service workers.

Unfortunately, what’s happening in Michigan is happening across the country.

Another report looking at national job creation finds that jobs created in the coming years will not provide economic security wages to the majority of workers who do not have 4-year college degrees.

Some states, like Texas, who like to boast that they’ve added jobs to their labor force, are actually adding more low-paying jobs which only serve to financially meet less than the basic needs of the workers and keep them in poverty.

Though some would argue that a paycheck is better than no paycheck in these times when the unemployment rate stands at nine percent, a new study looking at job seekers’ feelings about their prospects for finding employment validates the underreported trend in the jobs sector:

When asked why they are looking for jobs, 32 percent of job seekers said they are unemployed and need a job, while 36 percent reported that their current jobs do not pay enough.

The fact that half of all employed job seekers are looking for new jobs to increase pay may be a sign that the jobs that have been created during the recovery are low-paying. Without sufficient income in the hands of American workers, consumer spending could slow down, and potentially weaken the recovery.

The news is even worse for workers of color. The report identified two groups of job seekers: “experienced, educated whites, and young, unskilled (often black or Hispanic) workers.”

The white workers are looking for better paying jobs and the unskilled are looking for any kind of job. What that means is that these young Latinos will be the first to accept low-wage jobs and with no skills or education to advance or break out of the low-wage employment sector their American Dream will look far different from that of their parents.

But then again, in a country that is promoting low-wage jobs over high-skilled labor, it may only be a matter of time when the American Dream becomes a footnote in U.S. history.