LatinaLista — If the rumors circulating on Capitol Hill are true, the GOP thinks they have an Ace up their sleeves on how to at least split the Latino vote in the November presidential election. 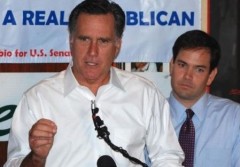 Now that Mitt Romney has won both Arizona and Michigan, no matter how marginally, talk is that he’s pretty much accepted as the party’s nominee for president. The second piece of business for the candidate is to choose his running mate — though it sounds like the GOP leadership is doing that for him. Their choice seems to be Florida Sen. Marco Rubio.

According to an article in The Hill, Sen. Rubio seems to be vetting himself for possible selection:

And campaign fundraising reports show that Rubio spent more than $40,000 in the last six months of 2011 to get himself researched by a public affairs firm.

According to the article, the most notable Democrats who have declared war on Rubio are Sen. Harry Reid and Democratic National Committee Chairwoman Debbie Wasserman Schultz (Fla.). Both questioning Rubio’s lack of support for traditionally seen Latino issues like the DREAM Act and immigration reform.

The Republican strategy to have Rubio as a vice president nominee to split the Latino vote would make sense in any other election — but this one. The collective Latino community has come together in a bipartisan way to urge right-wing conservatives to address immigration reform by starting with passage of the DREAM Act.

Time and time again, Rubio has frustrated those efforts.

Romney has already categorically declared that he would not sign a DREAM Act into law. So it’s obvious, aside from the fact that he agrees with Romney, that Rubio, as a vice president, serves nothing more than a carrot on a stick to get Latinos to vote for the GOP ticket by appealing for a sympathetic vote based on identity politics than party platform.

Unfortunately for the GOP though, this clever strategy won’t work.

The DREAM Act is the one issue that unites Latinos on both sides of the aisle and the GOP’s constant demonization — by labeling it amnesty; and stalling tactics — by saying they don’t agree with the “fine” points of the bill — doesn’t already sit well with most Latino Republicans who have been continuously rebuffed by their party when urging their peers to support the DREAM Act.

By the time the GOP convention in Tampa, FL comes around, when choice for vice president will be announced, Rubio’s name may have already been withdrawn from the hat if a new Latino-based campaign against the Florida senator garners enough steam between now and then.

Called “No Somos Rubios” (We are not Rubios), the campaign highlights Marco Rubio’s like-minded thinking on the DREAM Act as that of his potential running mate, Mitt Romney.

Felipe Matos, campaigner for Presente Action, called Marco Rubio “the anti-Immigrant son of immigrants, who supports Arizona’s racist SB-1070 law, rejects the DREAM Act and thinks that Latinos won’t notice that he’s closer to the Tea Party extremists than he is to Latinos on immigration and other key issues.”

Cynthia Arevalo, an immigration attorney and Florida representative of Somos Republicans, a Latino GOP organization that recently announced its support for Gingrich, said, “As a child of immigrants and as an attorney who has to listen daily to the tragic stories created by anti-immigrant policies supported by Marco Rubio, I think it’s utterly ridiculous to think that he will ‘deliver’ Latino votes. Latinos are not stupid.”

And they’re just getting started.

Tomorrow is a National Day of Action for the DREAM Act as part of the No Somos Rubios campaign with events planned in Washington DC, Arizona and Florida. At the Washington event, Illinois Congressman Luis Gutierrez, a frequent critic of Rubio, will participate by calling on Rubio to support the DREAM Act and immigration reform.

A focal point of the campaign is posing a rhetorical question to the Florida senator: “Marco Rubio – Latino or Tea Partino?”

It’s a question that for many Latino voters has already been answered but for others who hold out hope for a change of heart, well, as they say: people can always “dream.”