LatinaLista — The Congressional Budget Office (CBO) has reworked the numbers of how much the Affordable Care Act (referred insultingly among critics as Obamacare) is going to cost U.S. taxpayers. The good news: it will cost $84 billion less than previously expected, because of the recent Supreme Court decision that said states don’t have to expand Medicaid. 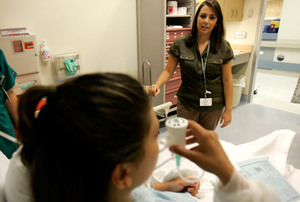 The CBO even went a step further to calculate the costs of House Republicans‘ actions to repeal the Affordable Care Act — it would increase the deficit by $109 billion over 10 years.

While nobody likes to see the deficit increase, there should be greater outrage over seeing our healthcare system be used as a weapon of class. According to the new report:

What’s even sadder is how the GOP has turned a humanitarian issue into a political one. How do we know? They have not offered one alternative to say how they would help the six million people who need health coverage as much, if not more, than any other American.

In regions of high low-income Latinos, who are more likely to not have health insurance, the condemnation of the Republican plan has been swift and furious. In Texas, where Gov. Rick Perry made a show of proudly saying he would not expand Medicaid in his state, though Texas suffers from having the worst uninsured rates in the country, he’s accomplished what few Republicans have been able to do thus far — anger Latinos enough to pledge to turn out to vote for a party that’s not against them.

Until Republicans can show the poor and the disenfranchised they feel their pain and are willing to help them in these tough times, their outreach to Latinos sounds hollow, insincere and, worst of all — elitist.

It’s a brand of democracy that is dangerous and deserves to be recognized for what it is — unhealthy for the country and our nation’s future.

New report reveals rural residents and poor Latinos and blacks have bigger challenge getting photo ID to vote
2 Comments
Intrn'l Video: For poor Dominican boys, baseball career is either a home run out of poverty or strike-out