LatinaLista — Not sure if anyone has ever done a tally of how many polls are released in a presidential campaign season but it seems like we’re on our way to a record-breaking amount for this election. In the past, depending on who the pollsters were, the outcome of any given poll could be somewhat (gasp!) manipulated. 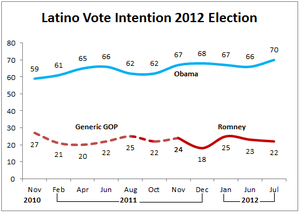 (Some) pollsters fashion questions to get the responses they’re looking for. They do it to validate their own views or the views of their clients. Yet, no matter how pollsters ask the question of Obama’s popularity with Latinos today, everyone is getting the same answers.

The latest poll reflecting a newfound Latino love-fest with Obama is the Latino Decisions poll. In the poll, that was commissioned by America’s Voice and the Center for American Progress Action Fund, it was found that for the first time “Obama received 70% of the vote in Latino Decisions polling on the presidential election over the past 20 months.”

What does that mean?

It means that according to this poll, Obama is winning 70 percent of the Latino vote compared to 22 percent for Mitt Romney. The reason for the sudden change of conviction for Obama among Latino voters stems, in large part, for the political compassion Obama showed the undocumented students by implementing a deferred deportation for young people who were brought or arrived in this country as children and who have stayed out of trouble.

With each negative reaction by Republicans towards the deferment — what many people see as a human rights issue — the gap has only widened with Latino voters as to who would better listen to Latino concerns in the White House. Of course, this is good news for the Obama campaign.

And if some refuse to believe the polling — thinking it might be manipulated — that shows Obama is ahead, they only have to check out a story coming out of Las Vegas.

It seems Mitt Romney has two mobile campaign trailers. One was trying to shore up support in Nevada, considered a swing state whose voters could help either candidate win the election.

When Mitt Romney’s presidential campaign bus pulled up Monday morning in front of the iconic “Welcome to Fabulous Las Vegas” sign, locals and tourists ambled over to take photos in front of the “Romney” bus logo.

…An hour later, it was a different story outside a Cardenas supermarket in a heavily Hispanic neighborhood in east Las Vegas where Romney’s rolling campaign office parked in the lot and not one person stopped by. Instead, GOP campaign workers stood outside the market doors to chat up customers as they came and went with groceries.

And maybe that’s the problem — Romney needs to be on the bus and actually meet the everyday Latinos whose lives will be most impacted by presidential decisions he’s already said he would do like doing away with the DREAM Act or repealing Obama’s health care plan.

In a surprising account, a Las Vegas columnist described how one Latina was willing to give Romney a chance. According to the columnist, the mother of two entered Romney’s campaign bus.

“Adriana Toscano brought her two children, ages 19 and 9, onto the bus to tell them about the man she wants to see in the White House,” the story reports. “Originally from Mexico, Toscano said she believes Romney would do a better job for Hispanics and the country.

“‘I believe in him,’ she said. ‘These years with Obama we see not too many changes. Everybody has a right to have soup on the table. We should give him (Romney) the opportunity.'”

However, opportunities are earned and the polls are showing that Romney is losing that opportunity with Latino voters as long as he pretends Latinos don’t have unique concerns that distinguish the Latino community from others.