Latina Lista: News from the Latinx perspective > Palabra Final > Politics > New data shows the power of the Latino vote is no bluff

LatinaLista — New data from the Center for American Progress (CAP) shows that the potential to create a highly influential Latino electorate isn’t a bluff. In states across the country are untapped, unregistered Latinos who are qualified to vote. If they all registered in their respective states the voting power they could bring to the national election would ensure, whichever candidate who can tap into that voter reserve, a sure victory. 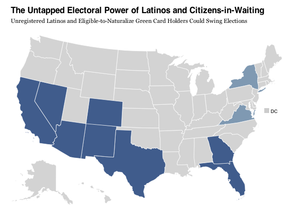 It’s reported that there are millions of unregistered Latino potential voters. Courtesy of an interactive map on the CAP website, we learn some interesting facts:

And those are only three of the ten states that the map identifies where unregistered Latinos are on the sidelines of the electoral process. In fact, of the ten states highlighted on the map, three have been identified as swing states where the Latino vote could make a difference in the election.

On top of this data, we are reminded that every month 50,000 new Latino voters graduate from high school.

The voting potential among Latinos to make a difference in the November election exists. Of that there’s no doubt. What’s lacking is political will to make it happen. Unfortunately, only a few months are left for voters to register until deadlines set in.

But registering couldn’t be any easier or more convenient.

At Long Distance Voter, unregistered voters click on their state, and can register online — to be ready to vote in November.

No one will never know the full strength of the Latino vote — until it’s used.

featured, Latino vote, swing states
Previous Post CDC's latest report sounds the alarm of Latino youth in crisis
Next PostIntrn'l Video: Revisiting Argentina's economic collapse through the voices of those who survived it

CDC's latest report sounds the alarm of Latino youth in crisis
1 Comment
Intrn'l Video: Revisiting Argentina's economic collapse through the voices of those who survived it