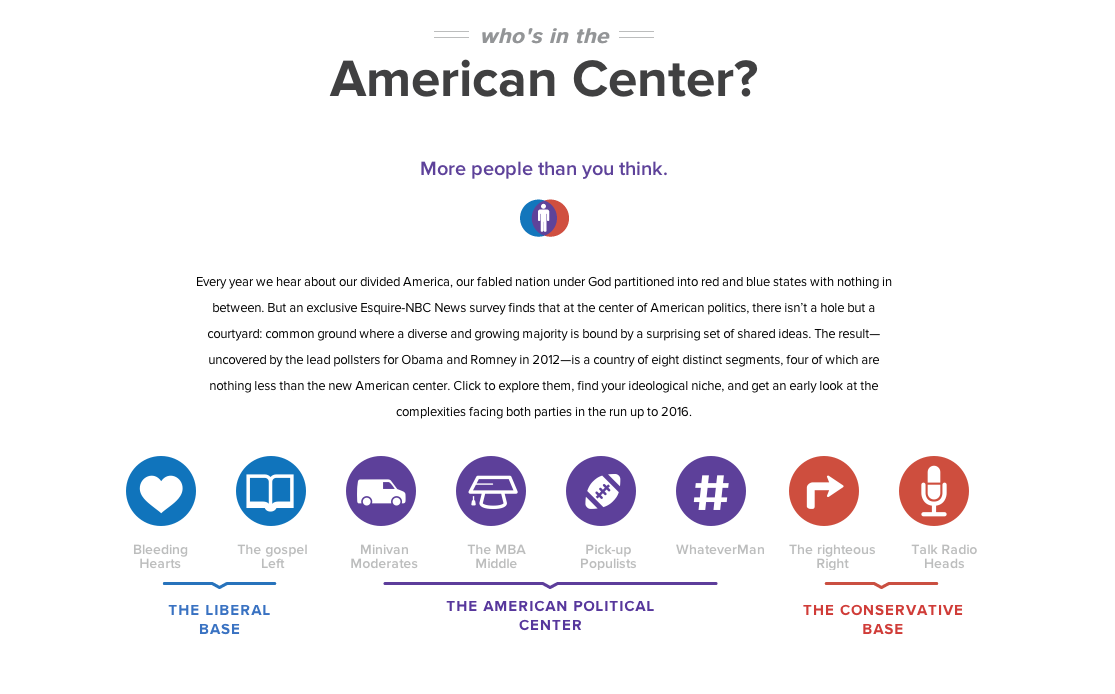 LatinaLista — It’s easy to get confused about what Americans really think or want when politicians seem to always end their partisan rhetoric with “It’s what the American people want.”

Well, now, thanks to the new Esquire-NBC News survey, Who’s in the American Center, we’re now supposed to know what ‘average’ Americans — those who don’t pander to extremism politics — really want.

One problem — everyone identified as “in the center” is identified as “mostly white.” In fact, among the 8 categories: Bleeding Hearts and the Gospel Left, which makes up (in this survey) the “Liberal Base;” Minivan Moderates, the MBA Middle, the Pick-up Populists and #WhateverMan, comprising the “American Political Center;” and the Righteous Right and Talk Radio Heads, classified as “the Conservative Base,” Latinos don’t show up among any of these Americans.

The closest any category comes to illustrating diversity is:

the Gospel Left: Mostly black party-line progressives who live in Southern cities but with God as their co-pilot fly rightward on social issues.

The #WhateverMan: Very young and diverse voters in the Northeast and the West who seem to lean left but are so politically ‘meh’ it’s hard to tell.

The identification of these 8 segments is attributed to “lead pollsters for Obama and Romney in 2012” when they were polling voters for their candidates.

Being essentially left out of the population segments — in turn, Latinos’ viewpoints on the issues discussed in the survey — it could be interpreted as validation for the feeling many Latino voters have long complained about — that our voices don’t matter.

The lack of Latino representation in these 8 categories could also imply that Latinos are painted with one broad political brushstroke and that both parties assume how Latinos vote and feel on the issues and so it’s a waste of time and money to poll Latino voters.

The assumption would be wrong and it only underscores just how little GOP and Democratic leaderships know or understand Latino voters.

For starters, Latino voters like to be included in such polls. Not because of vanity but when there’s no inclusion, there’s no accurate source of data to draw from for pundits who like to speak about the Latino electorate, like they know our actions and feelings intimately.

When one segment of the population is excluded from such polling that is used to portray a bigger picture of Americans, it detracts from the credibility of the poll and it diminishes, not just the voice, but the presence of that excluded segment.

In a country where the Latino electorate is on course to become such a pivotal political player, it doesn’t make sense that any poll would be considered complete without including the voices of Latinos.

Grooming Latin America's children to be the computer coders of mañana
1 Comment
Intrn'l Video: Swiss-Bolivian artist takes a 'brush' to social ills that divide society the world over