LatinaLista — At the height of the subprime mortgage crisis, the blame for it and the subsequent housing bubble bust were laid directly on the doormat of Latino and black homebuyers. 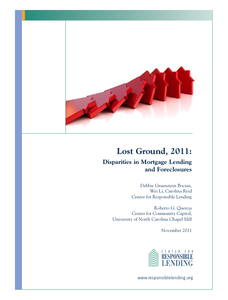 “Buying more home than they can afford” was the popular soundbite pundits and commentators echoed while trying to make someone accountable for the worst housing crisis in US history.

But a new report released today, Lost Ground, 2011: Disparities in Mortgage Lending and Foreclosures, published by the Center for Responsible Lending, reminds people that it wasn’t totally Latino and black homebuyers’ faults.

According to the report which analyzed 27 million mortgages made over a five-year period, Latino and black homebuyers have been more than twice as likely to lose their homes as white households.

Is it because they’re irresponsible, didn’t really want their homes or just decided not to pay their mortgages?

Yet, something different was happening among homebuyers of color that didn’t happen as much with white homebuyers — African American and Latino homebuyers were more likely to receive high-risk loan products, even when they could have easily qualified for standard loans.

African Americans and Latinos were much more likely to receive high interest rate (subprime) loans and loans with features that are associated with higher foreclosures, specifically prepayment penalties and hybrid or option ARMs.

In fact, the high foreclosure rates for Latinos is a direct result from being disproportionately targeted by subprime lenders. Given the rate unemployment has hit the Latino market – (11.4%), it’s no wonder Latino families were and remain having a hard time keeping their homes.

Revealed in the report is exactly how many Latino and black families have been impacted by the current housing crisis. Once the data is broken down, it becomes quickly obvious that people of color, who prized the American Dream of owning a home, weren’t just taken advantage of but robbed of a possession they didn’t see as an investment but as a home in which to raise their families and enjoy their golden years.

Number of lost homes by:

Likelihood that a Latino borrower received a subprime loan — 2.2x as often as whites