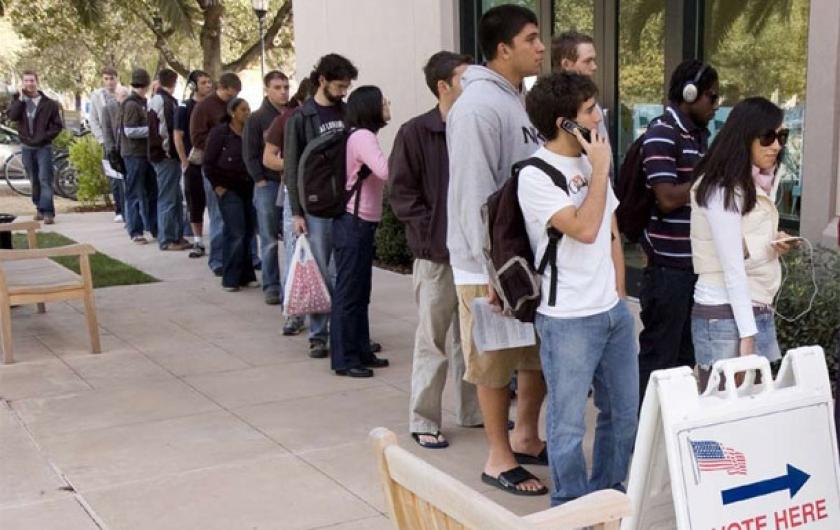 LatinaLista — It doesn’t take a genius to know that the surest way to instill the pride of civic participation in young voters is to make the experience positive. But a new report from the multi-racial civil rights organization Advancement Project and the national advocacy for youth political participation, OurTime.org, found that some young voters are “walking away” from the voting experience with anything but a positive attitude.

The Time Tax: America’s Newest Form of Voter Suppression for Millennials, and How it Must Be Eliminated to Make Voting Accessible for the Next Generation finds that Millennials (18-29),especially those of color, have been adversely affected by the new restrictive voting policies passed in some states, in the name of making voting more “secure.”

What has resulted is that from getting Voter IDs to the actual voting experience, Millennials are subjected to long lines and inconvenient wait times. The report’s authors found, for example, that in some Florida counties there was a high correlation between young voters and long lines.

And for anyone who knows and/or works with young people, patience is not a virtue yet mastered by many young people. Subjecting young people to such inconvenience when trying to fulfill their civic duty doesn’t just leave Millennials frustrated but makes them think twice about the value of their vote.

Reactions that conservative proponents of these new voter suppression laws may have had in mind when drafting them since Millennial voters are known to lean towards Democrat and Libertarian tickets.

A few of the report’s findings include:

The emphasis of the report is that these disparities and singling out of Millennials of color at the voting booths have to be addressed before the next election lest these young people decide all the hassle isn’t worth exercising their civic right. As it is, while more young people are voting, as a group they still lag behind other demographics.

“The ballot box is the one place where we are all supposed to be equal, whether young or old, rich or poor, and no matter one’s race,” said Katherine Culliton-González, director of Advancement Project’s Voter Protection Program. “These fundamental American values are broken, and we need to fix it now for the generations to come. We’ve submitted our report’s recommendations to the Presidential Commission on Election Administration, calling on them to making it easier, not harder, for young voters to participate in our democracy.”