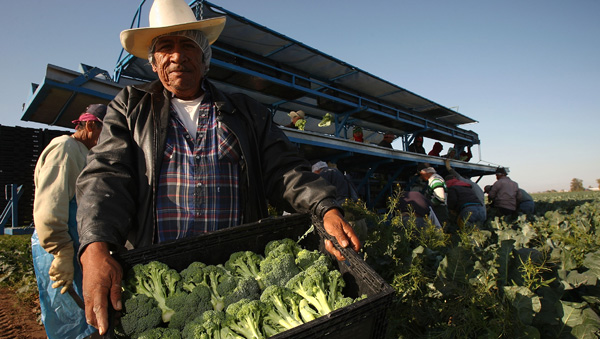 LatinaLista — In the ongoing campaign by the White House to pressure Congress to pass immigration reform, every executive branch department head has come out to make a speech, from their particular department perspective, as to why resolving our immigration policy would be good for the country.

To be honest, when listening to Arne Duncan or Janet Napolitano Attorney General Eric Holder or almost any of the other department secretaries make the case for immigration reform, their voices don’t necessarily resonate with average Americans, especially those Americans who don’t have kids in school, live in a border state, are of a mixed-status family, worry about gang crime or just think they live in an insulated bubble where undocumented immigrants don’t exist in their world — if they only knew.

But there is one department secretary whose voice should resonate loudly with Americans, for a single reason — his department is responsible for overseeing our food supply.

The argument automatically evoked to justify immigration reform has always been that “undocumented immigrants do the jobs Americans won’t do.” These days, in most industries, that argument rings hollow. The more desperate for a job the more inclined are some Americans to work in the hospitality industry, cleaning offices, stand in assembly lines, etc.

But there is one industry, regardless of the economy, that Americans will not apply — and if they do, they don’t last long — agriculture. According to the new report:

…there continue to be insufficient U.S. workers to fill labor needs: of those crop workers surveyed between 2007 and 2009, 71 percent were foreign born.

Not reforming our current immigration policy doesn’t just put our agricultural workforce at risk but the affordability of our food.

Already, the drought has taken a toll on our food supply.

The drought affected prices for corn and soybeans as well as other field crops which, in turn, drove up retail food prices in the final quarter of 2012 and the first half of 2013

Couple Mother Nature’s mood swings with farmers who do have a respectable crop but no laborers to do the picking, packing or harvesting and that spells trouble for the American consumer who can look forward to shortages of foods and higher grocery prices due to getting certain fruits, vegetables, etc. shipped from overseas to make up for our shortages.

There’s nothing that can be done to thwart nature but at least with passage of an immigration bill — one that prevents the exploitation of immigrant workers and pays fair wages and provides benefits — Americans are ensured of having an affordable and continuous domestic food supply that will keep pace with the nation’s growing and hungry population.