LatinaLista — As the presidential campaign officially gets underway and debate dates lined up, one issue that Mitt Romney will inevitably chastise President Obama over is the issue of national security. Yet, rather than debate how best to salvage the nation’s image in the Middle East after one soldier goes on a shooting rampage and others still think it’s funny to urinate on dead humans, the debate will surely focus on our southern border. 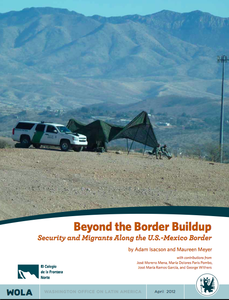 GOP contender Mitt Romney, if staying with his party’s platform, will claim the border is insecure and still poses a security risk where terrorists can easily slip across to do harm to the American people. He will also do his best to pull in undocumented immigrants too.

President Obama will counter that charge by saying the border has never been secure as it is today and will most probably cite his administration’s actions of bolstering a US presence on this side of the Rio Grande.

But who is right? Will this argument be merely a he-said-he said fight of words?

No, according to a new study that was released today in Washington DC by the Washington Office on Latin America (WOLA) and Mexico’s College of the Northern Border (COLEF).

Beyond the Border Build-up: Security and Migrants Along the U.S.-Mexico Border presents the findings of a year-long study of both Mexico and the United States’ border security policies.

The report’s findings show that Mitt Romney loses the debate about border security. Among the findings of the binational team of researchers:

1. A sharp disconnect between the border zone and Washington (as well as border-state capitals) regarding security conditions at the border, the notion of “spillover” violence, and the need to continue ratcheting up the security presence. We found that the upsurge in violence on the Mexican side of the border, while horrific, has had surprisingly little impact on citizens’ security on the U.S. side.

2. A dramatic buildup of the U.S. security presence along the border with Mexico—a fivefold increase in the size of the U.S. Border Patrol in the last decade, an unusual new role for U.S. soldiers on U.S. soil, drones and other high-tech surveillance, plus hundreds of miles of completed fencing—without a clear impact on U.S. security.

3. Security policies that were designed to combat terrorism and drug trafficking are causing a humanitarian crisis and putting migrants in increasing danger, by exposing them to abuse by authorities and organized crime.

4. Since 2005, the number of migrants apprehended by the U.S. Border Patrol at the southern border has plummeted by 61 percent, to levels not seen since Richard Nixon was president. Today, 20 migrants are apprehended a year per every border patrol agent.

The report’s authors explored if current conditions along the border still justify past policy decisions for securing it. The findings were not surprising.

…a closer look at the border reveals that after a historic buildup of the U.S. security presence there, further increases in money, barriers and manpower are unnecessary. The threats that actually exist don’t justify them, and the side effects—among them a severe humanitarian toll on migrants—are mounting.

It is urgent that Washington view the border security buildup as a past policy, not a direction for the present or future.

Unfortunately, talk about border security riles up the masses who ignorantly think the US is under deadly assault on a day-to-day basis. The issue makes for good politics for a party whose strategy is to whip the public into a frenzy about issues that aren’t nearly as dire as they want them to believe.

Because when it’s finally realized that there never was a problem, it’s a whole lot easier to take the credit for fixing it.