LatinaLista — The National Council of La Raza (NCLR) holds their annual national convention next week in Washington, DC and has scored a coup in getting President Obama to commit an appearance. In fact, they beat out their fellow Latino org, the National Association of Latino Elected Officials, who are still waiting for Obama to fulfill a 2008 campaign appearance promise.

Safe to say that if there are any NALEO members in the audience they’re not going to be too happy with President Obama. Another group who won’t be happy are some Latino farmers. 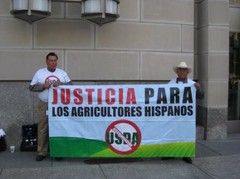 These Latino farmers are very unhappy with President Obama and are through waiting. They have been waiting for a long time for justice from the federal government in receiving a fair settlement for a discrimination lawsuit filed against the United States Dept. of Agriculture.

A settlement was offered to them just this year, after years of court fights, but compared to a settlement attained by black farmers the amount is far from fair. So, the farmers are trekking to DC next week, planting their feet squarely on the ground and plan to deliver the following letter to President Obama:

The following is a letter from Hispanic Farmers & Ranchers Inc. and Minority Agricultural Producers to President Obama:

As you address La Raza, Hispanics and Hispanic farmers and ranchers are paying attention to how rhetoric relates to reality. Here is our reality:

Your Administration offers Hispanic farmers a dual track alternative dispute resolution (“ADR”) process that provides up to $50,000 and a flat $50,000, respectively. The Clinton Administration offered black farmers an ADR process that provided them $50,000 and unlimited damages that could be proven (the largest amount is approximately $13 million).

Your Administration has offered black farmers, on their second round of settlements, an ADR process that provides up to $50,000 and $250,000, respectively and an identical claims process for Native American farmers.

While USDA spokesman recently stated that the settlement offered to Hispanic farmers is “at relative parity” with those settlements, Mr. President, $50,000, $13,000,000 and $250,000 do not reflect “relative parity.”

As a former constitutional law professor, you know the federal government cannot, consistent with the constitutional guarantees of equal protection and due process, pick favorites among minority groups, yet it has done just that, providing black farmers a more favorable claims process than the one provided Hispanic farmers.

If your Administration believes that it can disrespect Hispanics in this way while offering a few platitudes about universal immigration reform and the Dream Act because we have no political alternative, it did not learn the lesson of the mid-term elections.

We do not seek special treatment, merely simple justice. Accordingly, we urge you to direct Attorney General Holder to withdraw the current discriminatory settlement proposal for Hispanic and female farmers and begin immediately good faith negotiations with our attorneys to provide us a just settlement process.

It is the only fair way forward.