LatinaLista — If there is one crystal clear revelation about the Latino electorate from election night polling data, it’s that the overriding sentiment among the majority of Latino voters is that the GOP does not share their values — anymore. 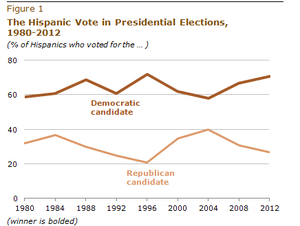 Poll data underscoring this reality is repeatedly surfacing in analysis after analysis.

The latest data from the ImpreMedia/Latino Decisions 2012 Latino Election Eve Poll shows that:

Couple these outcomes with what the Pew Hispanic Center’s analysis found of who within the Latino electorate voted overwhelmingly for Obama — young voters, women, those with incomes under $50,000 and no college degrees — and some very interesting questions arise:

Can Tea Party darlings like newly elected Texas Senator Ted Cruz and Florida Senator Marco Rubio ever be seen as a party asset to get the Latino vote? Chances are not now, if they ever were. And if not, does that alter their party’s commitment to them in future elections?

If the majority of Latino voters perceive the GOP as an elitist/extremist party, and the number of Latino voters will only be increasing by 2016, is there a greater likelihood that Latinos will create their own viable third party, especially if promises aren’t kept this time around?

Not to mention that the Latino constituency suffers from a Jekyll and Hyde situation — along with more Latinos going to college and getting degrees, there still exists a steady under-educated segment not skilled in the labor needed for the future, low literacy rates, still high teenage pregnancy rates and, as of now, a sizable amount of undocumented immigrants.

It’s said that the country must now be put on a difficult path towards healing. For the Latino community, the path that lies ahead will prove to be a lot harder — to bring everyone to the same level and become whole.

Pew Hispanic analysis shows Latinos made (overwhelmingly) good their end of the bargain
Comment
Video: Remembering Carlos Fuentes in his own words