Latina Lista: News from the Latinx perspective > Palabra Final > Politics > DHS Secretary speaks out about deportation raids as children and parents are rounded up 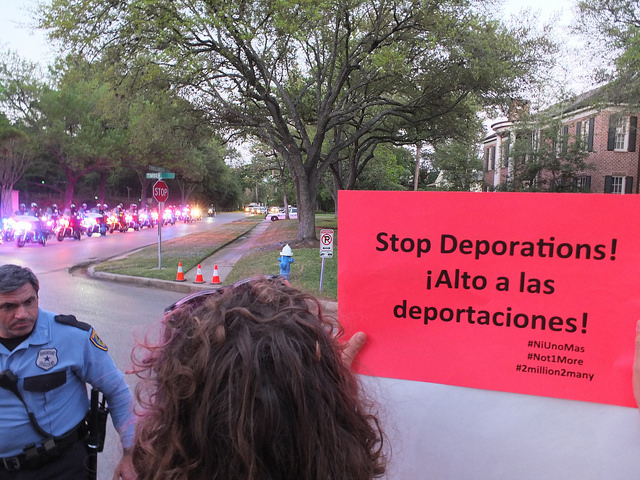 As news spread of the removals, immigrant advocates began reporting of the methods being used by Immigration & Customs Enforcement (ICE) agents.

The Los Angeles Times reported that on Saturday in Norcross, Georgia, ICE agents arrived in an unmarked car at the home of Joanna Gutierrez. The agents presented Gutierrez with a warrant for a “black person” (una persona de la raza morena). She told the agents she didn't know anyone of that description and told the agents they couldn't enter her home without a warrant. They pushed past Gutierrez going from room to room searching not for a man but really looking for Gutierrez's niece, Ana Lizet-Mejía and her 9-year-old son.

The agents eventually found the two and took them into custody.

Lizet-Mejía, who recently received a court order to leave the US after her asylum request was rejected, fled Honduras with her son after her brother was murdered by gang members.

Lizet-Mejía was among the first detentions of at least 11 families across the country targeted by the government to find and deport Central American migrants who sought refuge in the U.S. but were denied asylum.

As I have said repeatedly, our borders are not open to illegal migration; if you come here illegally, we will send you back consistent with our laws and values.

In November 2014, I issued new priorities for immigration enforcement as part of the President’s immigration accountability executive actions. These new Department-wide priorities focus our enforcement resources on convicted criminals and threats to public safety. These new enforcement priorities also focus on border security, namely the removal of those apprehended at the border or who came here illegally after January 1, 2014.

We must enforce the law in accordance with these priorities, and secure our borders.

Accordingly, the Department of Homeland Security, in conjunction with our domestic and international partners, is undertaking the following actions:

Removals. Since the summer of 2014 we have removed and repatriated migrants to Central America at an increased rate, averaging about 14 flights a week. Most of those returned have been single adults.

This past weekend, Immigration and Customs Enforcement (ICE) engaged in concerted, nationwide enforcement operations to take into custody and return at a greater rate adults who entered this country illegally with children. This should come as no surprise. I have said publicly for months that individuals who constitute enforcement priorities, including families and unaccompanied children, will be removed.

The focus of this weekend’s operations were adults and their children who (i) were apprehended after May 1, 2014 crossing the southern border illegally, (ii) have been issued final orders of removal by an immigration court, and (iii) have exhausted appropriate legal remedies, and have no outstanding appeal or claim for asylum or other humanitarian relief under our laws. As part of these operations, 121 individuals were taken into custody, primarily from Georgia, Texas, and North Carolina, and they are now in the process of being repatriated. To effect removal, most families are first being transported to one of ICE’s family residential centers for temporary processing before being issued travel documents and boarding a return flight to their home countries.

Given the sensitive nature of taking into custody and removing families with children, a number of precautions were taken as part of this weekend’s operations. ICE deployed from around the country a number of female agents and medical personnel to take part in the operations, and, in the course of the operations, ICE exercised prosecutorial discretion in a number of cases for health or other personal reasons.

This enforcement action was overseen by Sarah Saldaña, the Director of ICE, and supported and executed by Thomas Homan, a career law enforcement official who leads ICE’s Enforcement and Removal Operations.

At my direction, additional enforcement operations such as these will continue to occur as appropriate.

Increasing border security.  We are continuing to enhance our border security resources and capabilities, working closely with state and local counterparts. As a result of our long-term investment in border security over the past 15 years, U.S. Customs and Border Protection (CBP) has greater capability to identify and interdict illegal crossings than at any time in our Nation’s history. This includes the largest deployment of vehicles, aircraft, boats, and equipment along the southwest border in the 90-year history of the Border Patrol.  And through the Southern Border and Approaches Campaign Plan we launched in early 2015, we are for the first time putting to use in a combined and strategic way the assets and personnel of CBP, ICE, Citizenship and Immigration Services, and the Coast Guard to better protect the border.

In response to the recent increases in migrant flows along the southwest border, CBP has deployed additional permanent Border Patrol Agents to high-traffic areas, augmented operations in South Texas with Mobile Response Teams, and redirected support from other Border Patrol sectors including through remote interviewing technology.  CBP has also increased surveillance capabilities by adding tethered aerostats (long-range radars) and other technology, along with additional aircraft. CBP will sustain these heightened border security efforts, along with the humanitarian aspects of its responsibilities, while the current migration levels persist.

Unaccompanied children. As the number of unaccompanied children crossing our southern border has risen again in recent months, DHS has continued our close coordination with the Department of Health and Human Services (HHS), as it increases its capacity to care for unaccompanied minors and place them with sponsors. Our goal is to ensure that CBP has the continued capability to quickly and efficiently transfer unaccompanied minors after they are apprehended to HHS custody, as is required by U.S. law. In the past month, HHS added over 1,000 beds for this purpose, and recently announced that another estimated 1,800 beds will be available soon. HHS is continuing to explore options for additional beds if necessary.

Cracking down on criminal smugglers. In the summer of 2014, the Deputy Attorney General and I announced “Operation Coyote” to crack down on those involved in the criminal smuggling of migrants from Central America and elsewhere. Since then, 1,022 smugglers and their associates have been arrested, and hundreds of bank accounts have been seized.

With the Department of Justice, we are now doubling down on these efforts. This will build on existing initiatives such as ICE’s Human Smuggling Cell, which is working with the financial industry to target and disrupt the flow of funds to human smuggling organizations. DHS’s recently formed Joint Task Forces, JTF-West and JTF-Investigations, will coordinate the deployment of additional DHS investigative and prosecutorial resources and their integration into the Department of Justice’s ongoing law enforcement and prosecution operations.

Cooperation with Mexico. We are expanding our cooperation with Mexico in dealing with illicit migration. In particular, we are working with our Mexican partners to enhance joint efforts on our shared border, to support Mexico’s efforts on its southern border, and to shut down the criminal groups and illegal support networks that exploit vulnerable migrants. DHS and the Department of State will also continue to support the Merida Initiative, the longstanding partnership between the United States and Mexico to fight organized crime and associated violence.

Expanding the public messaging campaign. DHS and the Department of State are expanding our existing messaging campaign in Central America, Mexico, and the United States to educate those considering making the journey north, as well as their families abroad, about the dangerous realities of the journey. The messaging will also highlight the recent enforcement operations.

The Flores case. We continue to disagree with the District Court decision in the Flores case that a 1997 settlement of a case solely involving unaccompanied children now applies to children who arrive with a parent and their processing at today’s family residential centers. The decision, and the resulting injunction, significantly constrains our ability to respond to an increasing flow of illegal migration into the United States. We have appealed the decision, and the appellate court has agreed to hear the appeal on an expedited basis. Meanwhile, we have implemented significant reforms to how we operate our family residential centers to transition them to temporary processing facilities for these individuals, and have taken steps to ensure compliance with the District Court’s July 24 and August 21 orders.

Creating an alternative, safe and legal path. Finally, to effectively address this situation, we recognize that we must offer alternatives to those who are fleeing the poverty and violence in Central America. More border security and removals, by themselves, will not overcome the underlying conditions that currently exist in Central America. I am pleased that Congress, in the recently-enacted omnibus spending bill, included $750 million in aid for Central America.

In the meantime, DHS and the Department of State are accelerating the development of new mechanisms to process and screen Central American refugees in the region, about which we hope to make a more formal announcement soon. We will expand access to the U.S. Refugee Admissions Program in the region and develop more legal alternatives to the dangerous and unlawful journey many are currently taking in the hands of human smugglers.

These new refugee processing mechanisms will build upon the existing Central American Minors Program, which is already providing an in-country refugee processing option for certain children with parents lawfully in the United States.  Thus far, we have received more than 6,000 applications for the Program, some children have begun to arrive in the United States as part of the Program, and we expect the pace of arrivals to increase steadily moving forward. We are also engaging other countries in the region, encouraging them to join us in broadening access to protection for refugees from Central America.

I know there are many who loudly condemn our enforcement efforts as far too harsh, while there will be others who say these actions don’t go far enough. I also recognize the reality of the pain that deportations do in fact cause. But, we must enforce the law consistent with our priorities. At all times, we endeavor to do this consistent with American values, and basic principles of decency, fairness, and humanity ~ Sec. Jeh C. Johnson.