Latina Lista: News from the Latinx perspective > Palabra Final > Politics > “Dump the Trump” rally sounds off against Trump and his supporters

“Dump the Trump” rally sounds off against Trump and his supporters 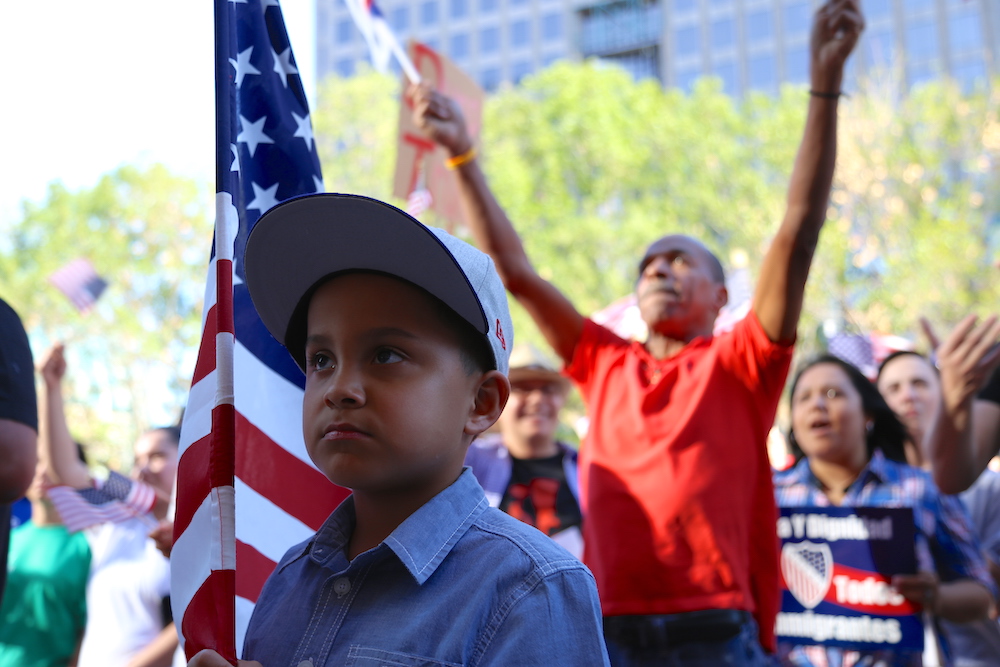 Protestors from around Dallas and different Texas cities marched through the streets of downtown Dallas waving U.S. flags and chanting “Dump the Trump!” Monday afternoon.

The wave of red, white and blue noisily moved for a mile from the steps of the of the Cathedral Santuario de Guadalupe to the American Airlines Center where Donald Trump would speak to his north Texas supporters.

Around 1,000 protestors took to the streets to express anger at the anti-immigrant sentiment Trump, the leading Republican presidential nominee, has been trumpeting around the country for the past few weeks.

Stephanie Saras and her husband Jose Carillo attended the march with their four-month-old son Jonathan. 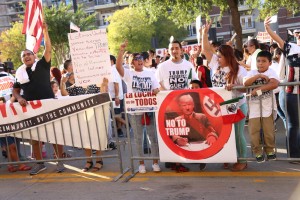 Saras said they decided to attend because her husband is an immigrant and they felt offended by the comments made by Trump and his supporters about Mexican immigrants.

“They always want to blame us for everything, but that’s not the truth. We’re here working hard to give our kids a better future,” Saras said.

Local leaders riled up the crowd when it reached its destination in a parking lot adjacent to the American Airlines Center.

“The road to the White House goes through the barrios and the neighborhoods of Dallas, Los Angeles, Miami, New York and those are our neighborhoods!” said former Texas house representative and attorney Domingo Garcia as the crowd cheered. “The people who pick our crops, who clean the toilets in the hotels, who build these skyscrapers – those people are going to pick the next president of the United States, and it’s not going to be Donald Trump!”

As Trump supporters began arriving for the candidate’s appearance, they mostly steered clear of the largely Latino anti-Trump crowd but for a few shouting matches that broke out.

North Texas LULAC director Christopher Enriquez said that he was glad to see so many in attendance given that the 5:30 p.m. time slot was not the most convenient.

Enriquez also said that one of the lessons the Latino community should take from Trump’s rhetoric is that there are actual elected officials who think the way Trump does about Latinos. 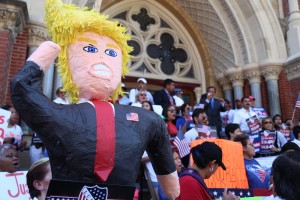 “We have to be careful with them. We have to really see and educate ourselves in who they are and what they vote for,” Enriquez said. “They don’t always help our community even when it looks like they do.”

Inside the center, Trump spoke to a crowd of about 15,000 people, according to the Dallas Morning News, but the candidate’s camp expected around 20,000.

As expected, Trump spoke about the need to “end” illegal immigration and the need to build a wall between the U.S. and Mexico and how he would force Mexico to pay for the wall’s construction.

These points drew the largest applause from the crowd.

As the rally slowly came to an end, Saras said that seeing the crowd made her feel optimistic about the election cycle.

“It’s good to see everyone here supporting each other. I just hope they all vote because we don’t need someone like [Trump],” Saras said.

Dallas, Donald Trump, featured, immigrants, immigration, Latinas, Latinos, politics, Republicans, Texas
Previous Post Peru turns to a higher source to protect its nature preserves
Next PostCrowdfunder: ABC board book teaches toddler girls they can grow up to be whatever they want to be

Peru turns to a higher source to protect its nature preserves
Comment
Crowdfunder: ABC board book teaches toddler girls they can grow up to be whatever they want to be