Guest Voz: Overcoming indifference is the nation’s biggest challenge yet

LatinaLista — There’s no doubt that the United States faces a fair amount of challenges in 2012. Yet, as Latina Lista contributor Ivan Marte points out, no challenge can be overcome or prevented if there exists indifference.

As we get closer to the end of 2011, it’s not a secret that the citizens of this nation are more preoccupied, disenchanted and confused trying to follow the path that our government leaders have decided to embark on issues like immigration, health care, how to end the financial crisis, the real estate dilemma, as well as, the unemployment situation. 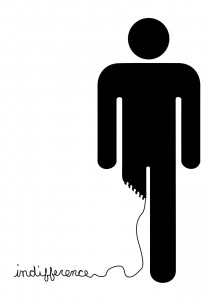 The country’s frustration cannot be blamed on just the President when everyone knows how deficient our members of Congress have been in these areas.

Congressional representatives have exhibited a mentality reflective of intolerance, a lack of empathy, and the most prevailing shortcoming today in our leaders and politicians — indifference.

As Stephane Hessel, the French author, diplomat, resistance fighter and world leader said, “Indifference is the worst attitude we can find in a human soul.”

As we celebrate the return of our troops from Iraq, I can see that our leaders are not conscious about another full-blown war that’s already stewing and on our very doorstep. It’s one that is easily preventable by acting according to our most valuable sacred scripture, the Bible, and our Constitution.

Since both writings agree in the ideal that everyone is created equal and that happiness is our life’s desire, if we want to fulfill our spirit, it’s ironic that our government should make it a priority to secure world peace abroad rather than start in our own backyard.

Peace should begin within our own communities. It should start in all of those different states throughout the nation that consider themselves independent and who are applying their own brand of capital punishment onto residents because of their lack of U.S. citizenship.

These states passing punitive immigration laws are sentencing only certain people to lives full of misery for the sole intent of depriving them of the same kind of life our forefathers envisioned we all should live.

They purposely pass these laws knowing that the Constitution was written with one and one purpose only, the provision of liberty for all and without prejudice, the respect to individual civil rights, the protection of our sovereign as we extend the same right and courtesy to other nations of the world.

My indignation comes at a time when we have entered into a world of social discomfort, an unjust inequality between the rich and the poor and the growing loss of credibility of our politicians, government, and our financial system.

This will lead us all to a path of destruction if we, as citizens, stand still and do nothing.

We should all realize that we are living in an extreme age where our most ferocious enemies are looking for ways to strike at the United States in any way they can — and they are getting closer.

Recently, the Spanish-language TV channel, Univision, reported that a Venezuelan government official had participated in a meeting with a representative from the Hezbollah group for the sole purpose of finding a common ground to recruit volunteers to promote and finance terrorism throughout Latin America.

It’s not a stretch of the imagination to imagine that the very victims of our current punitive immigration policy could be the next recruits for Hezbollah and any other anti-American group. What better group to cull recruits from than those who have been forcefully separated from their wives, children and parents and who now bear a grudge against our country for one simple reason — the indifference of our leaders to address immigration reform.

There is still hope that we have sufficient time to prevent a major tragedy on our doorstep and to restore the greatness of this nation. We know our faults and how to rectify them.

However, the real test to our nation’s salvation is if we have the political will to do what is right; the courage to face our reality; the vision to see our future; and, perhaps most importantly, the compassion to recognize that life, liberty and the pursuit of happiness are inalienable rights — to be bestowed and enjoyed by all.

Ivan Marte is the former chairman of the Rhode Island Republican Hispanic Assembly, and the founder of The Center for Defense of Civil Rights & Equality located in Cranston, Rhode Island, a nonprofit organization dedicated to serving Rhode Island’s neediest communities.