If you think you’re safe from Washington’s dsyfunction and the federal shutdown — think again! 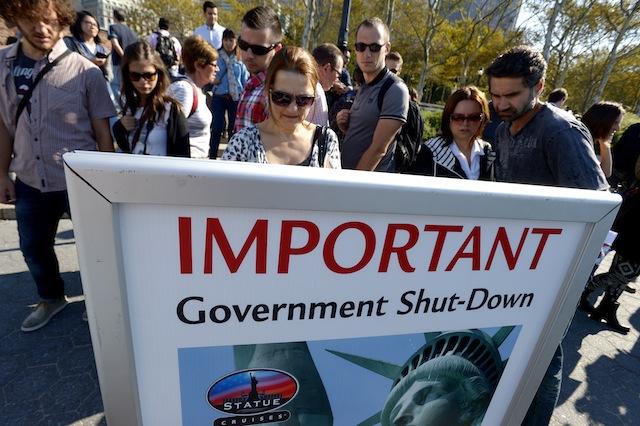 LatinaLista — There’s no escaping news of the dysfunction in Congress these days.

The partial shutdown of the government dominates headlines on a daily basis, as it should. Yet, until the recent outbreak of salmonella poisoning, the sad story of military families deprived of death benefits whose loved ones were killed while on active duty and the closure of Head Start programs, the situation in Washington seemed far removed from most of us.

It may only get worse unless the government fully opens for business.

In addition to fewer food inspectors, the federal shutdown is impacting every family with a college-bound student who needs to know how they’re going to pay for college tuition. It seems the shutdown has also closed online calculating tools at the College Navigator site that serves as a one-stop shop for families who want to calculate the different tuition rates of colleges across the country.

Examples of the consequences of the shutdown are growing as more filter down to average Americans. According to Odysseas Papadimitriou, CEO of the personal finance websites WalletHub and CardHub, those families who don’t have a breadwinner working for the federal government or depend on federal programs have a little bit of breathing room when it comes to feeling the full impact of the shutdown.

“The average family of non-government workers who do not receive government aid will not be directly impacted by the shutdown,” said Odysseas Papadimitriou. “However, there will be some indirect effects if government employees are out of work. Furloughed employees will/have already started to tighten up their spending – anything from pulling kids out of daycare while they are on furlough to not going out to the movies.

“When spending goes down, it indirectly affects the average family in such instances as company revenues decreasing, struggling companies making decisions that affect employees directly (hours cut, lay-offs, no year-end incentives, etc.), and prices on things like groceries and gas not falling enough to meet the influx of limited incomes. They will be impacted in non-financial ways as well, such as the unavailability of government information as evidenced by the Amber Alert site being down. But, in the early stages of a shutdown, the impact is indirect.”

It’s the later stages, when the dire doomsday date of October 17 is reached, that has economists and financial cable channels seesawing on the depth of the damage.

But one thing is certain if a default should occur on October 17 and last as long as the partial shutdown has lasted — everyone is going to feel something.

“Should the furlough extend beyond October 17th, then the problems and the financial struggles will become that much more amplified,” said Papadimitriou. “Even if the government decides to reimburse its employees, they will not be able to easily recover late bill payments, credit damage, etc. without some assistance.

“However, it will be worse for the average family since the government has no intention of reimbursing their lost hours, paycheck cuts, lay-offs, etc. and creditors aren’t likely to make arrangements with them since they were not furloughed despite the fact that the furlough may well have caused their sticky situation and their employers probably won’t do much about it either.

“It is completely uncharted territory for the U.S. to default on its debt, so the outcome is not an absolute known. But, I think it is safe to say, that it would not be surprising for us to fall back into a hard-core recession equal to and, most likely, worse than the recession of 2008.”

The Shutdown Will Stunt the Economic Recovery – Economists estimate the shutdown will reduce quarterly GDP growth by 0.15 – 0.20 percentage points per week. A prolonged three-to-four week shutdown could ultimately result in a 1.4 percentage point growth reduction, according to Moody’s Analytics Chief Economist Mark Zandi, thereby curtailing already sluggish end-of-year growth rates by half or more. Slowed economic recovery would result in fewer jobs being added and more uncertainty in the markets, and you don’t need a degree in economics to see how that would hurt everyone’s wallets.

Federal Loan Assistance Will Be “Frozen” – While the Department of Education estimates the shutdown will have only a limited initial impact on direct federal student loans and Pell grants, Small Business Administration loans and Federal Housing Administration loans won’t be accessible. In the words of President Obama, “Federal loans for rural communities, small business owners, families buying a home will be frozen.”

Affected Consumers Must Act Quickly to Secure Credit, Short-Term Loans – If you don’t have significant cash reserves and your job has either been put on hold as a direct result of the shutdown or will otherwise be affected by it, it’s important that you take immediate steps to secure credit or a short-term loan. You simply don’t want the government’s shenanigans to trigger a domino effect of damage across your financial life, causing you to miss bill payments, incur credit score damage, or suffer a credit line reduction.

Looming Default Could Lead to Higher Rates on Credit Cards & Loans – As the federal government approaches the precipice of default, investors will begin asking for higher interest rates on U.S. bonds, which would in turn drive up the rates we’d have to pay on credit cards, mortgages, auto loans, and more.

The Longer the Shutdown, the Greater the Damage to Your Portfolio – While the S&P 500 was up slightly at the end of the trading day Tuesday and stocks have shown an ability to rebound nicely after previous government shutdowns – stocks lost about 4% of their value during the ’95-’96 shutdown, yet rose more than 10% the month after it ended – the economy is far more fragile now than it was in the past. It’s therefore likely that the longer the shutdown goes on, the more fear and uncertainty will creep into the market. For some, this may present opportunities for value buys, but for many others it will result in nerve-racking reductions in net wealth that jeopardize retirement plans.

We Still Have to File Taxes, Yet Won’t Receive Tax Refunds – While the more than 12 million Americans who requested a six-month extension to file their tax returns back in April still have to pay up by Oct. 15, the IRS won’t be doling out tax refunds until government is back in business. That’s bad news for folks who were counting on those additional funds, but on the bright side, the IRS is also suspending its auditing process.