New analysis highlights growing problem: Depends on your state — how much your vote really counts 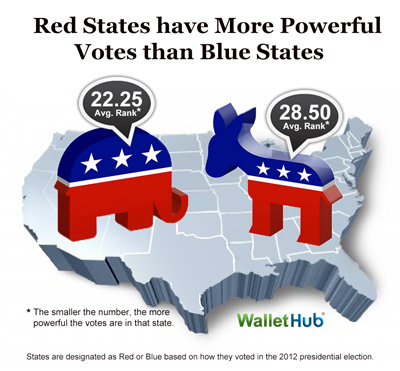 LatinaLista — It seems like an understatement to write that tomorrow is a midterm election given the volume of social media, email and television commercials over the past month reminding us to get to the polls.

Every “Get out the Vote” message reminds us of the power of our vote and opportunity to change local, state and national politics. Yet, thanks to a new analysis by WalletHub, we find that not every state’s voters wield the same kind of political influence. Voters in states with bigger populations are at a disadvantage since their representatives must answer to a wider variety of voters than in states with smaller populations.

WalletHub released a study identifying the nation’s most and least influential voters, in an effort to spur a national conversation about our current voting system.

Overall, a takeaway from the analysis seems to be less about the political strength of votes, as the strength of particular parties. The study shows that the GOP has more powerful votes than Democrats. It’s evident in the Red state of Texas.

Even with the dense population of Texas, the Tea Party enjoys a distinct, if not minority space, in state and national politics. It’s affiliation with the GOP helps them succeed in not only wielding undeniable influence when it comes to getting Tea Party-friendly candidates on the Texas ballot but getting them elected.

Below is the list by WalletHub of the state rankings on voters’ political influence: