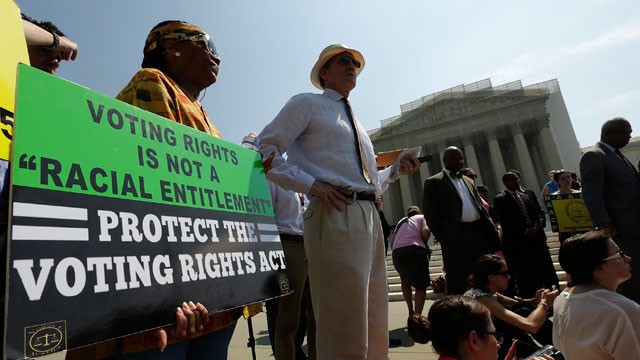 LatinaLista — The hallmark of the United States isn’t just our practice of democracy but the freedom of our elections — in theory.

Ever since President Obama was elected to the White House, there has been an increased effort by those states with Republican majorities and/or governors to pass legislation that would keep people from casting fraudulent votes — even though official data shows it’s not nearly the problem as some would have the nation believe.

Out of the 197 million votes cast for federal candidates between 2002 and 2005, only 40 voters were indicted for voter fraud, according to a Department of Justice study outlined during a 2006 Congressional hearing. Only 26 of those cases, or about .00000013 percent of the votes cast, resulted in convictions or guilty pleas

So, what’s the real reason for enacting laws that are addressing a problem that, for the most part, is non-existent — it’s called voter suppression.

It would benefit the Republican Party — because they are the majority of the authors of these kinds of laws — to ensure that less voters who opposed their party platform and politicians actually voted in elections.

Before the summer of 2013, there was a federal mandate that states, notorious for their suppression of votes by people of color in the past, had to clear with the federal government any changes to their state’s voting laws. In a shocker, the Supreme Court struck that oversight down and deemed that these same states no longer needed to get clearance from the federal government before implementing voting changes.

What has happened in the aftermath is clear proof of the real intent behind these laws that are promoted as ‘safeguarding the integrity of the American vote.’ Unprecedented activity erupted in Republican-held states to make changes to how, when and where votes are cast.

Most of these states got away with passing legislation but the federal government is challenging others.

The U.S. Justice Department announced Thursday that it will challenge Texas’s Voter ID law, saying it violates the Voting Rights Act, as well as the Constitution’s 14th and 15th Amendments.

…“Today’s action marks another step forward in the Justice Department’s continuing effort to protect the voting rights of all eligible Americans,” Attorney General Eric Holder said in a statement. “We will not allow the Supreme Court’s recent decision to be interpreted as open season for states to pursue measures that suppress voting rights.”

The full extent of what Republican legislators have been doing to achieve more favorable results at the polls has been documented in a new report titled Lining Up: Ensuring Equal Access to the Right to Vote

Published by the civil rights organizations, Advancement Project and Lawyers’ Committee for Civil Rights Under Law, the report highlights the organizations’ efforts to “combat restrictive voter ID laws, challenges at the polls, deception and intimidation, “show-me-your-papers” proof-of-citizenship practices, unacceptably long lines, and the troubling use of provisional ballots.”

According to the report’s findings, the assault on voters’ rights is not just blatant but disturbing in its effort to diminish a democracy admired around the world.

Some of the report’s highlights are: