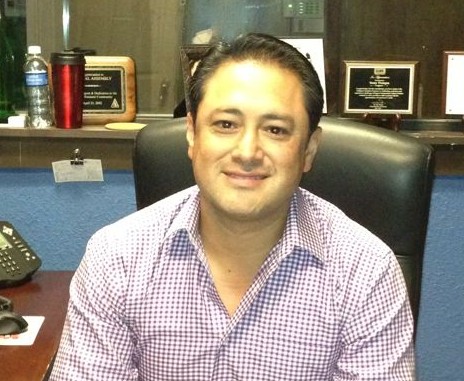 LatinaLista — North Texas businessman Tony Pompa considers himself a strong conservative. It’s a credential he flashes proudly these days as one of four Republican contenders vying in the most watched race in the state of Texas.

The political battle is for the District 10 seat belonging to Sen. Wendy Davis, the Tarrant County Democrat who shot to promince as the pink sneaker-wearing filibusterer now campaigning to be the third female governor in Texas history.

Pompa, the lone Latino in the running for Davis’ seat, is CEO of his own successful company, an avowed pro-Lifer, Second Amendment supporter and a two-year elected trustee on the Arlington Independent School District’s board, but he’s prepared to prove his politics.

It’s not that Pompa has to worry only about proving he’s as conservative as his fellow Republicans on the ticket, but he just may have to assure jittery voters that he’s as American as they are.

Last year, Pompa made national headlines when he confessed in front of his constituents and fellow school board trustees that he once was undocumented.

Born in the small town of Zitacuaro, Michoacan, Mexico, Pompa’s parents brought him to Houston in the early 80s. It wasn’t until 2008 — after he had started his business and he and his wife Julie were parents of five girls — that he gained his U.S. citizenship.

However, it’s his track record before and after since he acquired his citizenship that Pompa directs people to examine when deciding whether or not he’s a worthy Republican candidate.

“I think people will try (to use my background against me) but that’s why I’ve been very forward with it because I didn’t choose to come here when I was 11, my parents brought me,” Pompa said. “I’ve just done the best that I could with the life that I was given and since I got here all I’ve done has been to contribute to this great country — first, being a good student and then creating jobs – I’ve created thousands of jobs in the 20 years since I’ve been here and paid millions and millions in taxes into our economy. So, I can only do the best (that) I was given.”

Pompa readily admits that his choice of political party puzzles some and angers a few but it’s a decision that he says came naturally to him.

“This was a very deliberate decision that I made when I became a citizen and I went to vote,” Pompa said. “I recognized I had to pick a party and I looked within myself and anaylzed my values, my principles, the things that I believed in and I looked at my friends and who they are and what they stood for, and I looked at both parties and it was very clear to me that, even though the pressure was, that as a Hispanic you should be a Democrat, because that’s supposedly the party that supports or protects us as Hispanics, it didn’t make sense to me.

“For me, what lined up very, very clearly was that I was very much a Republican based on everything that I had ever lived by, all the values, the principles, the traditions that I lived by. There were all very much in line with the Republican Party and not the Democratic party.”

Though Pompa is fierce in defending his conservative values, he’s equally steadfast in standing up against those policies that he feels do more harm than good.

He’s not in favor of traffic checkpoints — “encourages racial profiling.” And while he supports Voter ID, he thinks his party can do more.

“I would like to see my Republican Party be more proactive in helping those who don’t have an ID to get an ID,” Pompa said. “We want everyone to vote, those who are qualified to vote and help them get an ID if that’s part of the process, and that removes any perception of racism because that’s not what this is all about. It’s about making sure we know who’s voting, that they have a valid ID and we’ll help them get one.”

While he doesn’t believe in blanket amnesty, and feels those immigrants who stayed in the country illegally should pay a fine — his own parents included, he also feels that any fine shouldn’t be a “death sentence where you never ever can become a legal resident” and that young people brought here as children, known as Dreamers, be given a break and put on a path to citizenship.

Pompa would also like to see a comprehensive immigration reform package that includes a policy providing people a pathway to cross back and forth across the border legally, after the border is secure.

Needless to say, Pompa’s ‘compassionate’ views don’t sit well with the Tea Party or ultra conservatives in the GOP.

There’s already an effort underway highlighting his ‘liberal Republican leanings.’ A Texas conservative site noted that a recent “Meet and Greet” that the Pompa campaign had in Austin featured lobbyists who represented interests who “sued the state in the past to prevent Republican-enacted redistricting plans from going into effect and lawsuit reforms.”

Pompa knows politics can be an ugly affair, especially in the Lone Star State, but he’s focused on two goals if he should win: getting more Texas Latinos involved in the voting process and spearheading a new movement to reform the state’s educational system.

Yet,regardless of the election outcome, Pompa’s proud that his inclusion is forcing analysis of a stereotypical assumption.

“I think what really makes this race unique and special and something I did not expect when I first decided to run… was the opportunity to affect the general political discourse in this state and in the country,” Pompa said. “The perception is that all Latinos vote Democrat and therefore Democrats are going to take over the state as the population of Latinos continue to grow.

“I don’t believe that. I believe that as Republicans we should get at least half of that vote and I have an unique ability to deliver that message. I am that Latino community in so many different ways.”