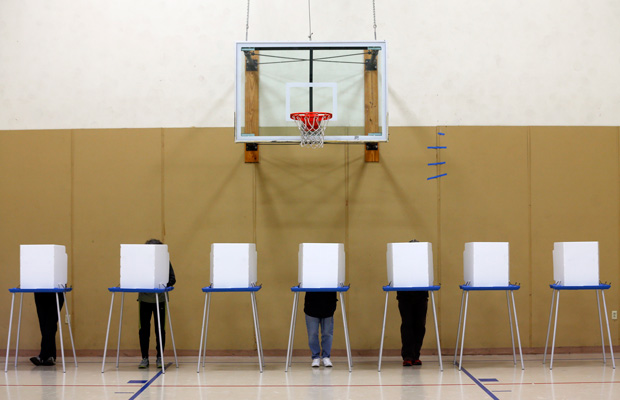 LatinaLista — Today’s official declaration that Latinos now outnumber whites in California hardly made news. Most people across the nation thought that threshold had already been crossed and even the U.S. Census data, which was released in late June, reveals that the shift of a Latino majority in the Golden State was already happening as early as the first half of 2014.

Yet, another study that was released today underscores there’s little for the state’s newest majority to celebrate.

In the newly released 89-page study by the Center for American Progress, The Health of State Democracies, California received low marks (D+) in having the state’s rich diverse population reflected in their state government. The one bright spot is that the state did get a B when it comes to efforts in providing citizens access to ballots and voting.

In fact, the “D” notwithstanding, California ranked 22 out of the 50 states in having a healthy democracy.

Analyzing states’ responsibility to its citizens via protecting voting rights, inclusive diversity in state representation and monitoring influence exerted on political campaigns, a handful of states garnered Ds and Fs in each these areas.

“Too often in this country, access to the freedoms and privileges guaranteed under the Constitution are determined by ZIP code,” said Michele Jawando, vice president of Legal Progress at the Center for American Progress Action Fund. “Whether it is access to voting rights, representation in government, or the outsized influence of money in our political system, the opportunity to interact with and participate in democracy is available to some, but blocked for many. There are, however, many factors that make up a healthy democracy that should be evaluated in sum, not in silos, if solutions are going to have an overall effect.”

Texas, another state where Latino majority is expected in the near future, fared much worse than California. The Lone Star State ranks 40 and received failing marks (F) for access to the ballot; C+ for state representation and D- for influence in the political system.

New Mexico, which has been Latino-majority long before California, ranks 13 and received one “B” — for “Representation in State Government.”

Arizona, an embattled state when it comes to Latino and immigrant rights, ranked higher than New Mexico — coming in at 12 — and receiving a B in having both a representative government and limiting influence in their political system.

As the report’s authors noted, even in the states that ranked at the top of the list, not one state received straight As or straight Fs, signifying that while strides have been made there’s much more work to be done.