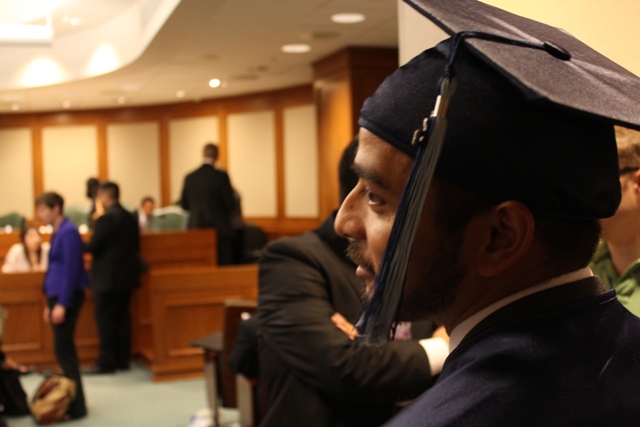 Activists from all over Texas gave more than 12 hours of public testimony in an attempt to keep a Texas senate bill that would repeal a 14-year-old law that allows undocumented students to pay in-state tuition from advancing to a full committee vote.

They descended on the capitol in Austin wearing colorful graduation caps and gowns and holding hand-written speeches that they hoped would turn the hearts of the state senators who would more than likely vote to advance to bill from the subcommittee on veteran affairs, military installations and border security.

During the hearing, Campbell said she believed there is a finite number of available enrollment slots at public universities.

“Nothing about my bill is intended to be a threat in any way. It’s about where are we going to place valuable resources? I think, in priority, they need to be for Texas residents first,”Campbell said.

Loren Campos, a civil engineer from Houston, said he benefitted from what is commonly referred to as the Texas DREAM Act by having been able to pay in-state tuition.

Campos also said that a repeal of the law would force many undocumented students who he knows to drop out of college.

“Education is an escape from the shadows for us. We are able to forget that we are in this situation,” Campos said. “Going to school gives us a chance to be normal.”

About 150 people registered to speak throughout the day. Representatives from public education, higher education, the private sector and the religious community showed up to speak in favor of in-state tuition for undocumented students.

Courtney Dean, a 10th grade world history teacher from Arlington, said she works with many undocumented students through a college readiness program and almost all of them make it to college.

Dean said that despite the outcome, she will not stop in her efforts to be a voice for her students.

“We’re in it to make our kids be all that they can be. If you stop them in high school, then they’ll never reach their true potential,” Dean said. “I’m not going to stop until I know that my kids will not be stripped of their right to continue their education.”

Rick Noriega, the former Texas house representative who wrote HB1403 back in 2001, said the attitude at the Texas capitol has drastically changed since the former Republican governor Rick Perry signed the bill into law.

“It was a different environment. You were able to build coalitions around the merit of the issue,” Noriega said. “Today we’re in a very different, very visceral political environment where people can run on slogans that are put on bumper stickers. They are merely able to say shrill things for the purposes of appealing to a minute voice and then they’re expected to do those things when they get here.”

Noriega said he also sees the current course of events as a result of the Hispanic community’s lax attitude around election time.

“When we participate in the voting booth at probably less than 30 percent at state and federal elections – well then, con razón they can say and do all kinds of crazy things,”Noriega said. “Maybe we’ll finally wake up and start participating. If we did participate the way we should, this issue would never come up. We wouldn’t be facing it here tonight.”