LatinaLista — It used to be Latino voters were so predictable. Any politician campaigning for office knew they could get Latino voters in their corner if they included on the stump: talk about strong family values, the immorality of abortion and homosexuality and, for Cubans, condemned Castro. 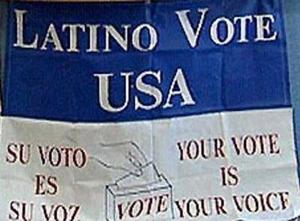 Aside from strong family values, everything else has changed. Unfortunately, there are some politicians who think time stands still for Latinos. They believe that at their own political peril.

For example, a lot of people thought President Obama signed his political death warrant when he recently endorsed same-sex marriage. While they knew the general population might be more sympathetically liberal to applaud Obama, they felt sure Latinos — being of strong Catholic faith and conservatives to boot — would desert Obama fast.

The opposite has happened.

The headlines tell it all:

Hand-in-hand with views about same-sex marriage, Latinas, when it comes to contraception, aren’t their mothers daughters entirely. Whereas, most of our mothers were preached into guilt about using contraception, the reality of today’s economy and career goals of the new generation are dictating different attitudes towards what used to be considered a taboo subject.

According to the National Latina Institute for Reproductive Health:

Fact: The overwhelming majority of Latinas, including Catholic Latinas, use contraception.

Fact: Most Latinas, including Catholic Latinas, support the coverage of contraceptives.

On the issue of abortion, Latinas have evolved in their attitudes in this area too but not as much as in other areas. According to the Guttmacher Institute:

• Non-Hispanic white women account for 36% of abortions, non-Hispanic black women for 30%, Hispanic women for 25% and women of other races for 9%

Yet, the fact remains that Latinas are having abortions, regardless of church teachings. As one young Latina who had had a couple of abortions once told me, “It’s all fine for the Church or someone else to tell me not to do it but in the end where are they when I need food for the children, clothes and a roof over our heads. Are they going to provide that for me? They’re not doing it now.”

And finally, we come to Cuban Americans. Of all the subgroups of Latinos, Cuban Americans could be counted on to vote Republican, think Republican and do Republican. To a certain degree that’s still true but there definitely a generational divide in the Cuban vote these days.

In an article published by Politico titled Younger Cubans no longer a lock for GOP, the author points out several reasons why the GOP should worry if they think they can still appeal to Cuban Americans with the same old rhetoric.

Political strategists in Miami caution against drawing too strong a connection to U.S. policy and fading allegiances, but for various reasons, overall GOP support among Cuban-Americans has dropped by nearly 20 percent since 2000.

Aside from these evolving perspectives, there is another change happening in the Latino electorate — more Latinos are running for political office. Long been told that nothing will change unless the right to vote is exercised, some members of the community are taking that scolding a step farther to place themselves in positions to instill change themselves.

Although all eyes will be focused squarely on the race for the White House this year, there are several important races taking place down the ticket that have important implications for the Latino electorate. There are several Latino non-incumbent candidates running for Congress in 2012, with many having legitimate chances to win. You add to this the many Latino incumbents who will be running to retain their seats, and this election could be pivotal for Latino representation in Congress.

Many pundits are already starting to discount the value of the Latino vote in the 2012 election by citing lower enthusiasm for this presidential election and voter apathy. Yet, to see more Latino candidates run for office and knowing that they will only get in with the help of Latino votes, could be enough to spur disillusioned voters to the polls come November.

After all, family is the one area where Latino voters haven’t evolved one bit.