LatinaLista — Today’s new poll by Latino Decisions and ImpreMedia show a Latino electorate losing some of its enthusiasm for the November election. 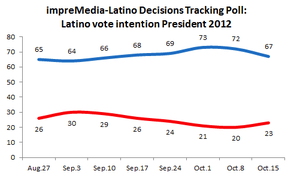 Two weeks ago, 93% of voters described themselves as “very enthusiastic” or “somewhat enthusiastic” about this election, but that number dropped to 81% in this week’s poll. With little change in the partisan numbers for Obama and Romney, the enthusiasm numbers may the most crucial indicator on Election Day, with the Latino vote being cast as decisive in many states such as Florida, Nevada, Colorado and Virginia.

Though the presidential campaigns are down to the wire, most people feel that the campaigns have been going on too long. By this time, in any campaign that isn’t offering anyone excitingly new, public interest is bound to deflate. Neither candidate is saying anything that hasn’t been heard before and there’s a complacent tendency among a lot of voters, anecdotally speaking, to believe that the “right” candidate will win regardless of whether or not a person votes.

This kind of complacency might explain the results of a new Texas study identifying who are the voters who register but don’t show up to vote.

The 2.3 million non-voters in Texas broke down as 34 percent Hispanic, 5 percent African American and 61 percent everyone else. The first surprise of the study was that neither gender nor the length of time someone has been registered influence whether someone made it to the polls.The statistics also showed that Hispanics remain disproportionately more unlikely to cast a ballot than other groups. Hispanics between 35-44 years old were staying away at much higher rates than other groups… (and) young Hispanics, between 18-44 years old, also voted in much lower numbers than other ethnic groups.

The study’s authors attributed the poor turnout among Latinos due to them having a harder time getting off work. Yet, while that may affect some, the broader reason may be lack of enthusiasm and that pesky complacency that the right candidate will win, with or without their vote.

The study’s authors said that the best way to achieve a higher turnout is to make it easier for people to vote. There’s no debate that for some groups — mothers with infants and toddlers, seniors who have trouble getting around — etc. that making it easier, whether with electronic voting or changing the voting day to a weekend maybe, that there could possibly be a higher turnout.

But there’s no accounting for people who just don’t think their vote matters.

And if a person thinks that way, they’ve already lost the enthusiasm. So, how is that enthusiasm re-ignited?

Is it by fiery speeches? A stellar debate performance? A personal phone call?

No. All those things only create a temporary uplift. What is not done enough in this country is drilling home the point that it’s not just a right of every citizen, but a duty, to vote. Voting is always described as a ‘privilege” but that leaves the voter with a choice. It also empowers those against certain kinds of voters the opportunity to deny those voters that privilege.

Voting needs to be messaged, in a bi-partisan way, that it is our duty. Just as it’s a duty to pay our bills and taxes, and no one does it with any great enthusiasm, they do it.

If citizens were compelled to vote, they might be a more self-informed electorate, able to catch politicians when backtracking on issues or clearer on who they like and why.

If voting was seen as a duty, more effort would be made to get to the polls.

Unfortunately, there are still remnants of groups who see that it’s to their advantage if not everyone, especially voters of color, turn out and vote. Yet, if the law of the land was that everyone had to vote, the ones keeping people from voting would have a harder time defending themselves or preventing votes being cast.

In the process, the nation would be ensured that our democracy is operating at its full potential and the voices of ALL the people were heard.