LatinaLista — Just how racist is the United States?

It’s a question that used to have a gray area. Though it was recognized that some regions of the country were still stuck in the pre-Civil Rights era, the broader assumption was that the educated among us could lead the rest of the nation out of such dark, backward-type thinking. 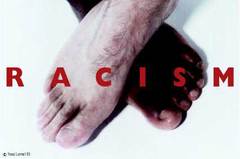 Several recent examples of blatant racism have illustrated that the kind of thinking we thought was eradicated long ago is not only flourishing but is being passed off as national leadership.

While some of the GOP leadership like to pretend it’s all about patriotism, their steadfast opposition to raising the debt ceiling is less about saving this country from going into debt and more with making Obama a “one-term president.”

No one would question the sincerity of their actions in this case if it weren’t for the fact that at every turn they have done everything in their power to discredit Obama by opposing everything he brings to the table and resorting to insulting him in ways that are subtle but effective.

I’m not defending Obama. There are definitely issues that I don’t agree with him on but I respect him and the office he holds and I respect the Democratic process of government we have. It’s a respect that is non-existent now among the Congressional GOP. It doesn’t get any clearer.

No matter the political rhetoric and posturing, the underlying message the GOP is sending the country is that they don’t like a black man in office and they will do everything in their power to remove him. Otherwise, the Senate Minority Leader wouldn’t have made such a strange concession over the debt ceiling:

Mr. McConnell’s proposal to allow the president to raise the debt ceiling came after he said in a Senate speech that the country cannot solve its fiscal problems with Mr. Obama as president. “After years of discussions and months of negotiations, I have little question that as long as this president is in the Oval Office, a real solution is unattainable,” he said.

When has this ever been said of another President? Not even the Democrats, to my recollection, reacted so strongly towards former President Bush. No one ever yelled out at any other President during their State of the Union speech like was done with Obama.

And it doesn’t stop there.

Chairman of the Judiciary Committee, Rep. Lamar Smith (R-TX) wants to restrict the immigration enforcement powers of President Obama for the remainder of his term. It would prevent the President from prioritizing criminals, terrorists, and other threats for deportation over non-criminal immigrants with deep roots in U.S. society.

In other words, Rep. Smith lumps DREAM Act students, hardworking mothers and fathers together with certified murderers, rapists, drug dealers and other criminals deeming they all pose the same level of threat to the U.S.

An editorial in the New York Times today reminds us all that Rep. Smith didn’t always feel this way:

Back in 1999, Mr. Smith was one of several members of Congress who wrote the attorney general and the head of the Immigration and Naturalization Service, arguing that “unfair” deportations had caused “unjustifiable hardship” for otherwise law-abiding immigrants who had jobs and families and close citizen relatives. “True hardship cases call for the exercise of discretion,” the letter said.

What changed to make Rep. Smith do such an about-face? Obviously, the only thing that changed is that there is a black President in the White House now.

In a memo to colleagues, Smith said his proposed law would expire at the end of Mr. Obama’s term, when it would “restore these powers to the next president whom the American people elect — on January 22, 2013.”

To his credit, Obama has retained his public composure and focused on the nation’s issues while the behavior of some of the GOP in Congress gets more bizarre, offensive and disturbing.

Alabama Congressman Mo Brooks didn’t think there was anything wrong with saying recently what he would do to undocumented immigrants:

“As your congressman on the house floor, I will do anything short of shooting them. Anything that is lawful, it needs to be done because illegal aliens need to quit taking jobs from American citizens,” added Brooks.

Thankfully, Rep. Charles Gonzalez, D-Texas, of the Hispanic Congressional Caucus, spoke out against Brook’s remarks saying that references to acts of violence have “no place in the discussion for realistic solutions to our country’s immigration problems.” He said Brooks chose “irresponsible words that reflect a hateful, dehumanizing undercurrent” in the immigration debate.

Gonzalez’s rebuke had no effect on Brooks. In fact, no one from the GOP has reacted to Brook’s comments. This inaction displays, yet again, a willingness to openly practice racism of a bygone era — or an era that we thought was only relegated to the history books.

As the old saying goes — “History repeats itself,” but the real question is how long will we turn a blind eye and a deaf ear to it?