Latina Lista: News from the Latinx perspective > Palabra Final > Politics > Romney: At the point of no return with Latino voters

Romney: At the point of no return with Latino voters

LatinaLista — Even before Mitt Romney and Paul Ryan officially accept the nomination from their party this week in Tampa, Florida, Romney is already having to deal with public detractors — from his own party. 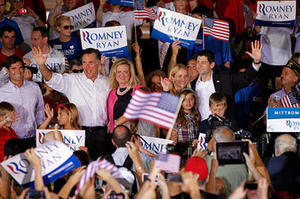 Over the weekend, it seems one after another of GOP politicians was laying it on Romney and his tone towards Latinos and the immigration issue. On Sunday’s NBC show Meet the Press, both Sen. McCain and former Florida Governor Jeb Bush cautioned Romney and his camp to think twice about what they say to Latino voters.

“We’ve got to have a better tone going forward over the long haul for sure,” the former Florida governor said. “You can’t ask people to join your cause and then send a signal that ‘you’re really not wanted.’ It just doesn’t work.”

Unfortunately, Romney may be so busy trying to secure the nomination that he doesn’t dare risk antagonizing a party that already has too many whispering he’s not the one. Today, New Jersey Governor Chris Christie and his advisors were put on the defensive denying a rumor published in the New York Post “saying the governor was cool to a vice presidential nod because he thought Mitt Romney was likely to lose.”

It’s clear Romney isn’t calling the shots yet in directing his party. In fact, a new poll shows that people care more about hearing what the extremist content is that has found its way in the GOP party platform than care to hear Romney’s acceptance speech.

With the immigration platform planks authored by the same GOP politician who authored Arizona’s SB 1070 and other states’ anti-immigrant legislation, and the platform poised to be ratified by the delegates, Romney will have to do a lot to distance himself — if he has the political will — from a tone and direction that has overtaken his party and is running a collision course with Latino voters.