LatinaLista — Try as he might — or not, Mitt Romney’s appeal among Latino voters is waning even more these days. This really shouldn’t be the situation. He has had every opportunity to make his case “elegantly” but time and time again his behavior supercedes his message.

After news leaked of his “in-elegant” 47 percent remark, Romney could have retaken control over his image and message at the Univision forum but now the nation is finding out otherwise. 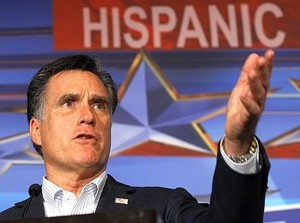 In an interview with BuzzFeed, Univision anchor, Maria Elena Salinas, reveals that Mitt Romney may have agreed to participate on the Univision forum but his actions belied his true feelings about being there.

Before the show even started, things weren’t going well for Romney and his team. First, they couldn’t find enough student supporters to fill the seats during his appearance. So, under threat that they would have to “reschedule,” Romney’s team was allowed to bus in supporters from around the city. The only problem is the supporters didn’t get a memo that this was a serious forum and not a campaign rally.

As a result, the crowd was too enthusiastic for the serious event, which the Univision anchors found to be disrespectful. But not the Romney team who gleefully pointed out the audience was more enthusiastic to see their candidate than President Obama the following night. Of course, they never mentioned that they “stacked” the audience.

If that wasn’t bad enough, the whole intro had to be retaped because, as one Republican observer was quoted as saying, “Romney threw a tantrum.”

While introducing Romney at the top of the broadcast, Salinas’s co-anchor, Jorge Ramos, noted that the Republican candidate had agreed to give the network 35 minutes, and that Obama had agreed to a full hour the next night. Ramos then invited the audience to welcome Romney to the stage — but the candidate didn’t materialize.

“It was a very awkward moment, believe me,” Salinas said.

Apparently, Romney took issue with the anchors beginning the broadcast that way, said Salinas, and he refused to go on stage until they re-taped the introduction.

It seems odd that an underdog candidate would not take the full hour to present his perspective on the issues and let the Latino electorate get to know him.

Instead of acting presidential, he was acting like a uh… arrogant CEO who doesn’t worry about being polite to common people, just shareholders.

In fact, when I heard how Romney acted at Univision, I was reminded of a commentary by Georgetown University history professor Michael Kazin, who made the case that CEOs may be great in the boardroom but not so good for leading a democracy:

…More important, Romney fervently shares the same mistaken credo preached by Hoover, Perot, and Cain. They all believed that to do well in business, which requires dedication to the narrow welfare of one firm or economic sector, splendidly equips one to triumph in the presidency, which demands a talent for reconciling competing interests and voter blocs for the purpose of advancing a semblance of the common, national good. To get rich may be glorious. But it does not qualify you to represent the best ideals of the country or to make policy for the vast majority of Americans. After all, the only chance most of us will have to get $100,000 a year in exchange for no work is to win the lottery.