LatinaLista — According to a Yahoo! news item, things are a little crazier than usual in Washington in advance of the President’s State of the Union speech.

Rebuttals and pre-rebuttals have become the new forms of communication between the parties with the Democratic National Committee holding a telephone conference call offering a pre-rebuttal to Sen. Marco Rubio’s official GOP rebuttal to the President’s Tuesday night speech.

The consensus, at least on the Sunday morning roundtables, is that Rubio is going to steer clear from the immigration reform issue, especially since he is taking the GOP lead on the issue and more of his comrades are making public declarations about their support now for the DREAM Act and other aspects of the overall issue.

Instead, Rubio will focus his rebuttal, in both English and Spanish, on “how limited government and free enterprise helped make his “family’s dream come true” in the U.S.” Yet, Rubio’s avoidance of the immigration issue, and the growing number of supportive party voices, aren’t signs that everyone in the GOP is still wholly on board with immigration reform — at least, if Sen. McCain’s combative interview with Univision’s Jorge Ramos over the weekend is any indication.

As someone who used to be a respected voice by Latinos of both parties, McCain changed his attitude towards Latinos after his 2008 loss and it’s clear that he still blames us for his loss.

There were subtle and not so subtle signs during the Univision interview that illustrated McCain holds grudges. Will it be enough to thwart his party’s attempt and block a vote on any immigration reform measure? Probably not but, as he showed in the interview, he’s going to make it as unpleasant as possible. 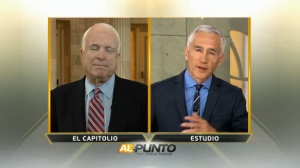 Below is the full text of the interview. You decide if McCain is just another Republican or one nursing grudges.

JR: Senator McCain, thank you so much for talking to us again.

JR: Senator McCain, after the election in 2008, you were against immigration reform, but now you are fighting for it. What made you change your mind?

JM: Actually I didn’t, despite your description of it. I have always and still now say that we have to have our borders secured. And unfortunately that’s not the case. The majority of drugs coming into the United States come across the Arizona/Sonora border. Our citizens in the Southern part of the state do not live in the same security that you do, which they deserve. Coyotes bring people across and treat them in the most unspeakable ways. And that’s why I have always had a priority for border security. I’d like to have my citizens live in the same security that you do there in your studio.

JR: Senator McCain, isn’t the border safer than ever before? You know the numbers. We have more agents than ever before. The number of apprehensions has gone down. The number of undocumented immigrants has gone down from 12 million to 11 million. And as you know, some of the cities along the border of Mexico are among the safest. So, I really don’t get it. Don’t we have the safest border situation ever?

JM: No, you’re right, you don’t get it. You don’t get it at all. Actually apprehensions are back up more this year. The drug traffickers are still able to cross our borders … guided by people in Arizona to Phoenix. The price of an ounce of heroin or cocaine is not any higher than it was a few years ago, which is the ultimate test. There have been improvements. There needs to be continued improvements in order that my citizens in the Southern part of my state live in a secure environment. So, I agree, you don’t get it.

JR: Let me give you some information. We received this information this morning Senator McCain. Border apprehensions in Arizona are the lowest in 19 years.

JM: So, I said, there have been improvements. There’s still thousands and thousands, some of them not from our hemisphere, who continue to cross our borders. The Yuma sector is actually operationally secure. The Tucson sector — we still have drug traffickers coming across our border, guided by people on mountaintops to Phoenix where the drugs are distributed all over the country. And that is the conclusions of our high drug trafficking authority. And those are also facts.

JR: Within the plan that you’re proposing with the other seven senators, there’s obviously a path to citizenship. This path to citizenship is going to be contingent upon the recommendations on a commission of border security. How would that work?

JM: Actually it’ll be finally determined by the Secretary of Homeland Security, because it’s not constitutional to have any commission decide decisions that are reserved for the Congress of the United States. But there will be a commission of people who are involved in these issues everyday from across the country. And they will be making recommendations as to what additional measures need to be taken. In fact, we have developed technology, thanks to Afghanistan and Iraq that we have much better surveillance capabilities than we have had in the past. And I intend to push — and I’m sure we will — use those capabilities of surveillance that will, I think, relieve the need for personnel who operate, as you know, under very difficult conditions along our border.

JR: Senator, let me ask you. As you know, the House is considering a proposal for legalization without a path to citizenship. Is this a good idea?

JR: Do you think you’ll have the votes in the Senate to a path to citizenship?

JM: You know, I don’t know yet, because we haven’t finished the package. I know that the attitude of the American people is that. And I think that there’s a realization on my side of the aisle that we need to have this resolved. And that people should have a pathway to citizenship. But look, I’ve lost before and so for me to predict would be premature. But I do think that the attitude overall of the American people and members of the Senate is significantly improved to the point where I am cautiously optimistic.

JR: What would happen with the GOP if they — probably not in the Senate but in the House — decide to vote against immigration reform? What would be the future for Republicans, especially within the Latino community?

JM: Well, I hate to obviously predict what might happen. I think it had been done what argument they made or what, but I’m cautiously optimistic that with the President and the Senate basically acting together that that would be sufficient to have the House, to agree with that, if it’s reasonable with the majority of the American people. So it’s hard for me to predict. But I think you, I know what you’re referring to, and that is the election results with a smaller number of our Hispanic/Latino citizens that are voting for Republicans. We understand that.

JR: One final question. Can you give us a timeline of how long it would take for an undocumented immigrant to become a U.S. citizen? I have heard different numbers — from seven to 15 years. What’s your take on this?

JM: We haven’t gotten into that kind of detail. But what I do want to assure you is that it will be a balance between getting behind — in line behind everyone else. But at the same time not making it such an arduous lengthy process that it would be actually in some ways meaningless, at least to some of our older people who have come to this country and lived here for many years in an illegal status. So again, I am optimistic, we can work that out. But I really couldn’t predict exactly the length of time.

JR: Senator McCain, thank you so much for talking to us again.