LatinaLista — Charles Starkovich made national headlines this week when he just couldn’t take the rampant discrimination against Latinos in his small town of Raton, New Mexico. 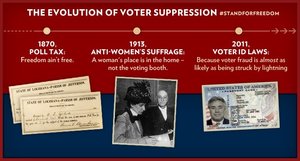 It’s not that anyone was blatantly mistreating Latinos in public in this town of less than 7,000 but they were doing something equally egregious, according to Starkovich — they were denying Latinos equal representation in the local elections.

Raton practices a common electoral process known as at-large voting. However, across the country where this electoral process is still in place, it is understood that it has serious consequences for anyone who doesn’t belong in the majority.

In addition, since there are no districts, this voting systems eliminates the possibility of gerrymandering. However, because this is a winner-take-all system, at-large voting shares most of the same problems as single-member district plurality voting, including the misrepresentation of parties, manufactured majorities, low voter turnout, high levels of wasted votes, and denial of fair representation to third parties, racial minorities and women. And it may make some of these problems worse.

As in the case of Raton, New Mexico, Starkovich saw firsthand that the process did make things worse — for Latinos.

“It’s a silent form of racism,” he told the Los Angeles Times. “And it waters down voting strength of a particular class of people.”

The town’s now ex-mayor says he has steamed for years as he watched political power “stolen” from Latino residents…“My protest is over a form of government rather than discrimination over a class of people,” Starkovich said. “When it comes to big congressional races, people have one vote for the person who represents them in that area, and that’s the way it should be here in Raton. I’m trying to draw attention to an institutional at-large voting scheme that has never been challenged since the Voting Rights Act of 1965.”

Starkovich is a man with a conscience who recognizes the injustice of this particular electoral system. Because he is Anglo, the residents of his town are taking him seriously.

(Raton) City Manager Pete Kampfer told the Associated Press that he was disappointed in Starkovich’s resignation but agreed that Raton’s system discriminates against the city’s Hispanic residents.

Yet, this fight against the at-large voting system is nothing new. From Anaheim, CA to Reno, Nevada and the the whole of Washington state, Latinos and sympathizers are challenging local officials, who cling to an archaic electoral process, that knowingly excludes a good portion of an electorate.

While Starkovich has just begun his battle, some battles are finally drawing to a close.

In Farmers Branch, Texas, the city council approved this week new single-member voting districts to replace the at-large system. They didn’t pass the measure out of the goodness of their hearts but rather because after lengthy legal battles where the city was challenged a court ruled in August that the city had to do it.

“Plaintiffs have proved, under the totality of the circumstances, that Hispanics in Farmers Branch have less opportunity than other members of the electorate to participate in the political process and to elect representatives of their choice,” U.S. District Judge Sidney Fitzwater wrote.

The judge noted that Farmers Branch has a racially charged election history and that its elected officials still behave with hostility against Hispanics.

At-large voting systems, along with onerous Voter ID laws, are reminders that there are still very active forces in play that want to keep the minority vote suppressed. Until more people like Charles Starkovich dare to take a stand, this country will remain stuck in what is recognized as the ugliest part of US history — denying some of its very citizens equal rights.