Latina Lista: News from the Latinx perspective > Palabra Final > Diversity > The mindset of Norway’s shooter is alive and well in the US and pointed at Latinos

LatinaLista — He was against Muslims immigrating into his country and he didn’t like that society was turning multicultural. Those have been the two reasons offered as the motives for the bloody rampages of Norway’s most notorious mass assassin, Anders Behring Breivik. 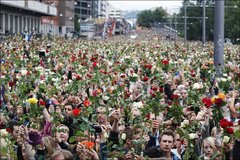 As soon as his motives were made public, it caused most people to take stock of what is happening in their own communities, states and nations.

Around 250,000 people gathered in Oslo on Monday to commemorate the victims of the Oslo-bomb and shooting at Utøya.
(Photo: Reuters)

While it would be so easy, and even desirable, to distance ourselves from the demonic actions of Breivik and declare that we have rooted out that kind of homegrown hatred and misdirected thinking in our country with the execution of Oklahoma City bomber Timothy McVeigh, the fact is we haven’t.

Every day, we are reminded that the United States has our fair share of Breiviks — from the airwaves of talk radio to, unfortunately, the halls of Congress.

The degree to which intolerant, immigrant bashing individuals have infiltrated our democratic system of government is scary. They are there and we don’t have far to look.

Yesterday, House Judiciary Conference Chairman Lamar Smith, a Republican from Texas, wanted to discredit President Obama’s stand on immigration reform, which the President publicly endorsed that same day in a speech before the national convention of the National Council of La Raza. Smith released a press release that was nothing more than propaganda for his anti-immigrant views.

Because Smith and others like him don’t like the demographic shift in the country anymore than that troubled Norwegian. They honestly see no reason as to why 12 million people cannot be rounded up and deported. They don’t care if mothers and fathers are torn away from their families.

In their eyes, it’s one less Latino.

Smith has been trying to push for a bill that would strip President Obama of all immigration enforcement power. Never in the history of our country has such a thing been proposed. Such a bizarre act can only be indicative of the sickness of hate that is permeating this country.

There would have been a time when I would have thought such a statement would be overdramatic — now, I can see it’s understated.

The proof that intolerance, discrimination and blatant racism is around us every day, and we have a choice — pretend it doesn’t exist and act surprised when some deranged individual who sees him/herself as the immigration enforcer of the world kills 76 people to make a point or call out those who would hold back society from reaching its full potential.