Latina Lista: News from the Latinx perspective > Life Issues > Environment > The other big issue Latinos are waiting to hear in Obama’s State of the Union

LatinaLista — The recent public declarations of support for the DREAM Act and increased talk about immigration reform among Republican politicians has solidified Obama’s promise that he and Congress will address the issue sooner than later. 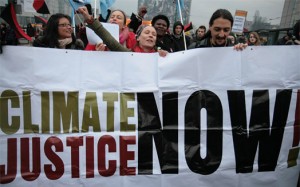 While there are still aspects of immigration reform that activists and community leaders want to see addressed immediately, such as: a moratorium on deportations, tying “path to citizenship” to border security and re-unifying families separated by deportations, the general consensus is that it’s time to move on to start working on other issues that disproportionately impact Latino communities.

One of those issues has to do with climate change.

A conference call this morning sponsored by Green for All discussed how climate change impacts communities of color and what the panelists would like to hear in President Obama’s State of the Union address regarding the issue.

“Communities of color are the first and worst hit by climate change,” said Phaedra Ellis–Lamkins, CEO of Green for All.

From heat waves to superstorms and mega-blizzards, Ellis-Lamkins pointed out how low-income African Americans and Latinos suffer the most and are among the last to receive federal help.

To illustrate the point, panelist Rep. Barbara Lee of California shared her experience growing up in a small African American section of El Paso, Texas near a smelting plant. Because of the proximity of her neighborhood to the smelter, Rep. Lee shared that many of her friends and families contracted lung diseases and many died before the age of 50.

Rep. Lee said it was these types of polluting plants, located in low-income and communities of color, that not only trigger chronic respiratory illnesses among people of color but also contribute to exasperating the climate change problem.

Both Lee and Ellis-Lamkins said they would like for President Obama to address climate change in his speech in a meaningful way that would hold the fossil fuel industry accountable, invest in the infrastructure of low-income communities and accelerate research into relieving the impact of climate change on communities of color.

However, both women would like to hear President Obama clarify that climate change is a problem and announce what measures he would take using executive authority.

Additionally, Rep. Lee suggested that the President can talk about climate change in terms that will catch most conservatives’ attention.

“I would like to see the President frame climate change as part of the deficit reduction strategy where jobs can be created in the energy sector which can reduce the deficit in the long term.”

Unfortunately, as other members of the panel pointed out, it’s access to the necessary, and too often costly, training for those green jobs that keeps Latinos and African Americans from being able to take advantage of the opportunities to get out from under the dark clouds of polluting plants that are shortening the life spans of those unlucky enough to live in their shadows.

Climate change is more than just seasons of extreme weather. It’s about how low-income and/or people of color have been taking the environmental and medical hits all along in the name of national progress, and now the hits keep getting bigger and are taking a more destructive toll.

It’s about doing what’s right for a people whose only crime is living too close to company plants whose main concerns for profits cloud their conscience from doing what’s morally and ethically right.

It’s about a government by the people for the people.