Latina Lista: News from the Latinx perspective > Palabra Final > Politics > The Voting Rights Act is a long way from being ‘racial entitlement’

LatinaLista — The yardstick used by Latino leaders to prove we have politically ‘arrived’ has been Latino voter registration and turnout at the polls. Unfortunately, that same measure of accomplishment is being used to prove to the Supreme Court that the Voting Rights Act has outlived its usefulness. 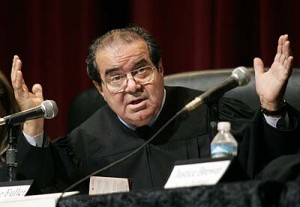 Today, the Supreme Court heard oral arguments about the constitutionality of the Voting Rights Act of 1965 that has ensured people of color and the disenfranchised get an equal chance to cast a vote.

Critics of the Voting Rights Act say one particular feature of the bill — that certain areas of the country have to notify the government if they make even the slightest changes to voting procedures — isn’t necessary anymore and the proof is in the swelling numbers of people who register and turn out to vote.

Conservative Justice Antonin Scalia went as far as to describe it in racial terms.

Addressing the question of why Congress had extended Section 5 in 2006 with no opposition at all in the Senate, Justice Antonin Scalia said it was “very likely attributable, to a phenomenon that is called perpetuation of racial entitlement. It’s been written about. Whenever a society adopts racial entitlements, it is very difficult to get out of them through the normal political processes.”

Characterizing the Voting Rights Act as “racial entitlement” is both an insult to disenfranchised communities and a glaring illustration that ignorance knows no heights.

The fact that this country has gone from a point in history that necessitated legislation like the Voting Rights Act to a Supreme Court Justice who sees it as ‘racial entitlement’ is a reflection of how institutionalized racism has embedded itself in US society.

While it’s true that more people of color, low-income and otherwise disenfranchised have been able to register and vote, it doesn’t always translate that their votes have been properly counted or that these people were able to cast votes easily.

During the election, the nation saw example after example of how voters of certain precincts, namely minority, had to overcome misinformation and polling place irregularities just to cast their votes.

Luckily, Section 5 of the Voting Rights Act was in place at that time. Otherwise, no telling to what depths some people would have gone to keep others from casting a vote.

Unfortunately, to too many people that’s the definition of politics.

New app aims to 'mPower' youth by getting them to care about issues
1 Comment
Video: College instructor creates play based on the Latino immigrant experience