Latina Lista: News from the Latinx perspective > Palabra Final > TIME interview with Sen. Marco Rubio shows a Latino who’s learned to get ahead in politics

TIME interview with Sen. Marco Rubio shows a Latino who’s learned to get ahead in politics 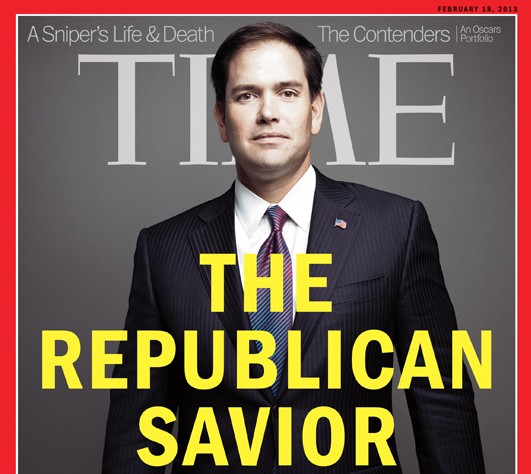 LatinaLista — Florida Senator Marco Rubio is riding high these days. Not only has he emerged as a leading Republican voice on immigration reform but he’s been chosen by his party to deliver the GOP response to the State of the Union address next Tuesday, as well as, being the subject cover of an upcoming TIME magazine issue. 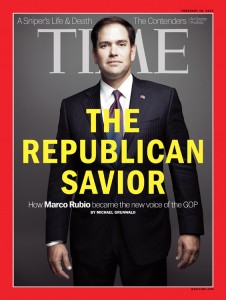 The interview highlights Rubio’s Cuban-American/Latino culture, along with, how he’s been able to get so far ahead in the Republican Party. His answers don’t reflect a noble ascent into public service but rather mark someone who has merely, so far, learned how to play the game of politics to advance around the board.

Rubio’s detractors, and even some admirers, suggest that his career so far has been less about good government than politics and self-promotion. His autobiography recounts virtually no substantive achievements beyond a hometown tree-planting project. In the class, he devoted much of his time to recounting the machinations that persuaded his colleagues to elect him speaker: “You raise money for them. You befriend them. You make sure your kids are friends with their kids. And then you cut the best deal you can.” He didn’t mention that the deal he reportedly cut to secure North Florida support for his candidacy revised funding formulas at the expense of his South Florida constituents.

The interview also revealed two events underscoring the internal conflict Latino politicians like Rubio face and will face when belonging to a party better known for defiling Latino constituents and obstructing immigration reform.

The article talks about Rubio’s grandfather, a man he claims was his biggest role model, living in the United States illegally for a time. Rubio’s response to the revelation is hypocritical to what he has gone on record saying in the past and what the GOP have said about undocumented immigrants.

In another book, The Rise of Marco Rubio, the journalist Manuel Roig-Franzia reveals that Papa was also, for a time, an undocumented immigrant. After fleeing Cuba in 1962, he was detained at the Miami airport and later ordered deported. But he was never sent home, and eventually he qualified for residency under the Cuban Adjustment Act of 1966, which still ensures Cuban refugees special treatment in the U.S. Rubio says he never knew his grandfather had lived in the U.S. illegally. But he told Time that Papa’s situation illustrated the moral quandaries surrounding immigration, which he wrestles with today.

“He didn’t have a legal right to be here, but America wasn’t going to deport an elderly man to a communist dictatorship,” Rubio says. “It equates to these kids who were brought here when they were 5 or 6 and have no memory of the country where they were born. America is a compassionate country that says, ‘Let’s help these folks.’ But you have to do it in a way that doesn’t encourage people to bring their kids in the future, so they can get the same benefit. It’s complicated.”

While the argument to allow DREAM students to stay is one that the majority of American people were already on board with before the GOP leadership became ‘enlightened’, the same compassion must be had for the elderly who are here without the proper paperwork and don’t want to return to a country where a low socioeconomic class is as much of a hardship as living under a communistic government.

Separating parents from children and putting US-born children of detained immigrants up for adoption are not practices of a compassionate country either.

If Rubio wants to be more than just a politician who happens to be Latino, but embrace being a Latino politician, he has to reach a compromise that recognizes the reality of what is happening in these communities across the country and not just create a reality that fits the GOP palate.

The author of the TIME interview shared that Rubio had received a phone message from his mother regarding immigrants.

Oriales García Rubio knows how it feels to want more. When she was a girl in central Cuba in the 1930s, her family of nine lived in a one-room house with a dirt floor. Her dolls were Coke bottles dressed in rags. She dreamed of becoming an actress. Instead she married a security guard, moved with him to the U.S. and found work as a hotel maid. Her husband got a job as a bartender while starting a series of failed ­businesses—a vegetable stand, a dry cleaner, a grocery. They never had much. But their house had a real floor. Their daughters had real dolls. They sent all four of their children to college to chase their own dreams.

That’s why on the morning of Dec. 21, she called her youngest son, Marco Antonio Rubio, the 41-year-old Senator from Florida and great Hispanic hope of the Republican Party—or, as she calls him, Tony. She got his voice mail. “Tony, some loving advice from the person who cares for you most in the world,” she said in Spanish. “Don’t mess with the immigrants, my son. Please, don’t mess with them.” She reminded him that undocumented Americans—los pobrecitos, she called them, the poor things—work hard and get treated horribly. “They’re human beings just like us, and they came for the same reasons we came. To work. To improve their lives. So please, don’t mess with them.”

Somehow, I don’t think the word “mess” is the proper translation but it does convey the point Rubio’s mother was trying to make to her son — have empathy for the (undocumented) immigrants. This family-generational contrast-in-views towards undocumented immigrants is not new, especially when sons or daughters are politicians.

People looking from the outside in describe this type of familial policy conflict as forcing Latino politicians to “juggle” their two allegiances — to family and party — but it’s not even about juggling. For politicians like Rubio, it’s about what will enhance their political careers — showing compassion for a segment of the population declared Public Enemy #1 by extreme conservatives, who rule the pursestrings, commission appointments and political networks, or taking mom’s advice to remember their roots and not be the bullies in the biggest courtyard in the nation.

It’s about weighing which is the most beneficial option and, unfortunately, siding with party almost always wins out because in the end mamis will always forgive and love their hijos and hijas.