LatinaLista — Yesterday, the Georgia Senate approved a bill that would deny undocumented students access to a public college education. It’s not about paying out-of-state tuition, though these students have been life-long residents of Georgia, it’s about telling young people who want to improve themselves and their lives, who want to learn, that the only country they have ever known as home, is not going to allow it. 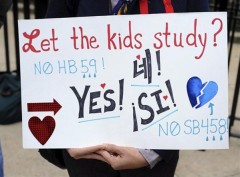 At this point, it doesn’t matter why. There is no reason on the planet to justify taking such an egregious approach to denying anyone the opportunity of an education.

As a nation, we don’t tolerate such actions taken in developing worlds so why is it condoned in the hallow halls of state legislatures in this country? If ever there was an example that some political leaders have not only lost their moral compass but lack the necessary wisdom to be leaderd, it is with this issue.

Yet, as the old saying goes, “When God closes a door, He opens a window,” people who know the difference between right and wrong and who have the wisdom to foresee the benefits of having these young people educated are taking up the slack.

Because of the oppressive nature of Georgia’s legislators against undocumented immigrants, a modern-day underground railroad has emerged that is an underground school where university professors volunteer their time to help educate students regardless of their citizenship status.

Called Freedom University, the curriculum is touted as being as challenging as any found in a traditional university setting.

Our faculty are fully committed to providing our students with college courses equivalent to those taught at the state’s most selective universities. We believe that all Georgians have an equal right to a quality education. Separate and unequal access to higher education contravenes this country’s most cherished principles of equality and justice for all.

These educators are not alone.

A highly influential group of Silicon tech leaders, including the widow of Steve Jobs, have united to combat this kind of bigotry by donating funds to a non-profit dedicated to the education of undocumented students that was started in 2006 in California called Educators for Fair Consideration.

Specifically, we provide scholarships, legal services, career internships, ongoing workshops, and a peer network for undocumented students in the San Francisco Bay Area. We also lead informational presentations and create educational materials to raise awareness about the needs of undocumented students nationwide. While many other groups and organizations serve immigrant youth, we are unique in our 1) exclusive focus on undocumented students and 2) holistic approach to addressing students’ needs.

While the actions of the Georgia legislature and other state legislators, who have enacted similar laws (Alabama and South Carolina), don’t look like they want to change their minds, the fact that other people — who are much smarter and visionary — and who have stepped in to preserve the ideals that this nation was founded on, should give any undocumented student hope and belief that there is a way to achieve their dream of having access to a college education.

Democracy Now! spoke with Azadeh Shahshahani, Director of the National Security/Immigrants’ Rights Project at the ACLU of Georgia, and with Keish Kim, an undocumented student in Georgia, who is originally from South Korea.

Both guests react to the bill and its impact on Georgia’s undocumented student population.

Previous Post On 176th anniversary of the Battle of the Alamo, Tejanos finally starting to get their due
Next PostInternational Women's Day continues the fight for "The Right to Be"

On 176th anniversary of the Battle of the Alamo, Tejanos finally starting to get their due
Comment
International Women's Day continues the fight for "The Right to Be"