LatinaLista — When describing diversity, it’s not uncommon to hear some form of the word “rich” associated with it — “diversity enriches the selection pool;” “a diverse class’s discussion is richer for all its different perspectives,” etc. 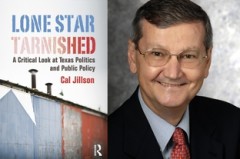 Yet, there’s one Texas professor who says the Lone Star State’s growing diversity, specifically the growth of Latinos, isn’t putting the state on a path to riches but to being a state much poorer than what it is today.

Southern Methodist University Political Scientist Cal Jillson believes the current reality among Texas’ Latino population of poor graduation rates and low incomes is creating the perfect recipe for Texas becoming a state in the future that won’t be able to support its own.

In an interview with a local reporter about the release of his new book Lone Star Tarnished, Jillson said:

“The problem is that educational attainment and income among Hispanics is too low to carry Texas forward. Unless that changes, we will become a poorer place… Anglos in Texas make almost twice as much per capita as blacks and Hispanics. That worked for Texas when Anglos were the large majority (Latinos are expected to be 53 percent of the Texas population by 2040)… I make clear in the book that the Hispanic population has a responsibility to focus on education, on staying in school, on graduating and going to college but the other side of that responsibility is squarely on Texas to fund high-quality public schools so that all children in Texas can excel.”

Jillson isn’t the first Texan to recognize that the poor educational levels in the Latino community have a big negative impact on the future of the Lone Star State. Last year, Richard Fisher, president and chief executive officer of the Dallas Federal Reserve Board, sounded a similar alarm/challenge to the Latino community:

It is time for our great Latino population to have the courage to face the facts: They must do a better job as families and within their communities to dedicate themselves to educational achievement. And it is time for all Texans, Hispanics and non-Hispanics, to act to create the conditions that will safeguard and nourish the prosperity of all our children and that of our children’s children.

With both men, it’s pretty clear that they see the majority of the fault lying with Latino parents. While that is definitely part of the problem, it’s only a part of it and the rest of the problem involves educators, politicians and federal policy.

I would challenge that if these other sectors of the overall problem were solved first then the last part — getting the kids to stay in school — would be a lot easier.

For example, unbelievably, we are still hearing stories of teachers and administrators who are telling Latino students that they will never go to college; that they are destined to work in the fast food industry on the food assembly line. These teachers are instrumental in discouraging our students. Their negative assessments, reported to be mostly made in front of packed classrooms, does more than discourage — it embarrasses the student. No student likes to be embarrassed, but when it happens to a young male Latino, it’s more than self-esteem that’s been damaged, it’s his machismo.

Obviously, it’s not enough for these teachers to have multicultural sensitivity training but these offending teachers need to review how to deliver positive messaging to all students, especially at-risk students.

Politicians, who equate the DREAM Act with amnesty, need to face reality — the students they want to drive out of their home states and public schools are the very students, who will not only be the most likely to graduate from high school and go on to college, attain an advanced degree and earn a very decent salary that will help state coffers in the future, but they are the role models to their peers and younger students and will serve as an inspiration to those other students to choose a career, stay in school and make a good living one day.

When enough boys and girls in a group aspire towards the same goal, whatever it is, it makes a huge influence on the rest.

Hand-in-hand with the DREAM Act is immigration reform. Though the act of passing any kind of immigration reform measure actually impacts a small percentage of the greater Latino community, the fallout from the debate — the vitriolic rhetoric, racial profiling, anti-Latino immigrant discrimination — impacts all Latino students. They see what’s happening and even if it’s not directed personally at them and/or their families, they feel more connected to the persecuted than the aggressors. And when they get mistakenly caught up in it, the impact fosters resentment plain and simple. Resentment often leads to rebellion.

Lastly, the Latino community does have to do its part and we are. There are creative people all over the country implementing programs to get Latinos to stay in school and go on to college or technical training, but the fact remains we still have to counter all of the above plus a laissez faire attitude towards education among a portion of the young Latino populace.

In his State of the Union speech, President Obama proposed to resolve the issue by making school mandatory for every student until they finished high school or reached a certain age. However, the implication is that if that student doesn’t abide by the rule then they would be criminalized as a result. If they’re not, such a ruling wouldn’t have any bite.

Yet, why would we want to criminalize students who are already at-risk?

So the questions remain: What do we do as a community? What do we do when programs to retain Latino students aren’t as successful as we like — kids are still skipping school, girls are still dropping out and getting pregnant, boys are still getting girls pregnant and dropping out to provide for their new responsibilities.

One solution might be a fine, but not just any kind of fine.

Since not finishing school or being a teen mom costs the state money in lost wages or costs associated with keeping that child vaccinated and receiving the proper nutrition, then whatever money the family and/or that student is making, if they’re not in school, must be paid back to the state.

There’s only one thing that hurts a family worse than having a loved one jailed or detained — and that’s being fined. No one can afford extra costs these days but if a student doesn’t finish school, it’s the responsibility of that family — both parents and student — to reimburse the state and not just for a year or two. This fine should equate with paying back a school loan which, as most people who have school loans know, it can take years to pay back.

When the consequences of not going to school are put in dollar terms for these students and their families, then a whole lot of them won’t just get the message but they’ll do whatever it takes to comply.