Until GOP leadership advocates for party change, there’s little hope of it happening 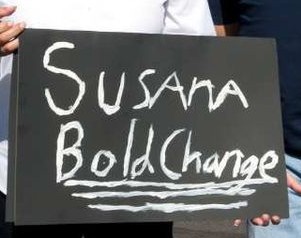 LatinaLista — There’s no better prescription for the Republican leadership going forward than to take to heart the old saying: “real change comes only from within and not without.”

There are encouraging signs already that some in the GOP party want to put this phrase into practice, but there’s only one problem — it’s not the white leadership leading the charge.

Among the most prominent GOP politicians calling on Republicans to change their tone and message is New Mexico Gov. Susana Martinez.

In a very frank interview with Politico, minutes after the Republican Governors Association meeting in Las Vegas this week, Martinez didn’t bother to tow any party line by being vague or misleadingly positive about the future of her party.

“We need to embrace them not just at election time,” she added. “We visit them, and they don’t appreciate that. And I don’t blame them for not appreciating that. We should not visit them when we need their vote and then walk away. And then four years go by and we go visit them again. We have to make them part of the solution, and the way you do that is by listening to them.”

She expressed disdain for Romney’s claim this week on a conference call that Obama won reelection because he offered “gifts” to minorities and younger voters.

“That unfortunately is what sets us back as a party — our comments that are not thought through carefully,” she said.

Another Republican governor who, before the election, only regurgitated the same failed party views, has discovered his own voice and is speaking out as well.

Louisiana Gov. Bobby Jindal surprised everyone when he “forcefully rejected” Romney’s assertion about the “gifts” statement.

“I don’t think that represents where we are as a party and where we’re going as a party,” he said. “That has got to be one of the most fundamental takeaways from this election: If we’re going to continue to be a competitive party and win elections on the national stage and continue to fight for our conservative principles, we need two messages to get out loudly and clearly: One, we are fighting for 100 percent of the votes, and secondly, our policies benefit every American who wants to pursue the American dream. Period. No exceptions.”

For Jindal and Martinez to step forward and publicly criticize Romney and the Republican Party for past behavior is a big deal but it would be a bigger deal if we had the likes of Chris Christie, Republican National Chairman Reince Priebus, Speaker of the House John Boehner, Senate Minority Leader Mitch McConnell, etc. taking the same stand and publicly voicing support for change in the Republican Party.

Until that happens, there’s little faith that the GOP will change anytime soon.