What Nancy Pelosi Means to Latinas

LatinaLista — The newswires and blogosphere has been abuzz all day with the swearing-in of Nancy Pelosi as the first female Speaker of the House.

Everyone around the world is taking notice that Ms. Pelosi is now the most politically powerful woman in the United States.

Of course, some will probably argue with that and say that as long as there is a married, heterosexual President in the White House, the First Lady will always be the “unofficial” holder of the title “Most Politically Powerful.”

But for all practical, not to mention, legal purposes, Speaker Pelosi will go down in the history books as the first woman to be publicly recognized as the holder of that title which also includes the fact that she is second in line to succeed the Presidency if anything should happen to the President and Vice-President.

It’s said that Speaker Pelosi carefully chose her wardrobe today. Her suit was a shade of purple, not coincidentally one of the colors of the woman’s suffrage movement.

Purple and tri-color mementos of the woman’s suffrage movement.

Her suit was not all that she planned carefully.

In her speech, Speaker Pelosi has one sentence that should inspire all Latinas and women of color.

And today, I thank my colleagues. By electing me Speaker, you have brought us closer to the ideal of equality that is America’s heritage and hope.

For too long, women of color have suffered through “motivational” speeches that never let us forget that unlike our hermanos (brothers) who only contend with racial discrimination, las mujeres (the women) have the proverbial “two strikes” against us: ethnicity and gender.

Rep. Keith Ellison (D-MN) photographed with his wife Kim and House Speaker Nancy Pelosi (D-CA). Ellison and Pelosi placed their hands on a copy of the Koran once owned by Thomas Jefferson
(Source: nwhm.org)

Any gains made in spite of our ethnicity were always tempered with reminders of our gender.

Pelosi’s position as Speaker solidifies the concept of equality more than any other leadership position held in the public or private sector by a woman.

It’s simple. Because Congress has always been historically majority male and white, Pelosi’s presence “at the head of the table,” if you will, illustrates that from the one place in the country where the rest of the nation still waits for its seal of approval on most things before embracing it in the national psyche, there is a woman who will for the next few years occupy the most visible chair in our government.

As people get accustomed to seeing Speaker Pelosi in the background as the President gives his State of the Union and others take the podium before her, it will start to be seen as the most natural thing to have a woman in such a high position.

And the days of hearing that Latinas have 2 built-in strikes against us, will be history. 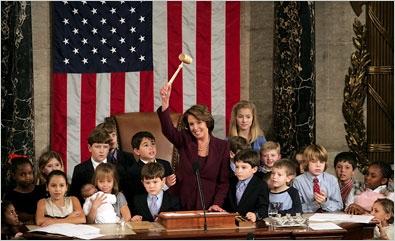 Speaker of the House with future voters.
(Source: NYTimes)

Previous Post Is Higher Education so Elitist that Undocumented Students Don't Deserve a Chance?
Next PostOutfitting Undocumented Migrants with GPS Devices is a Humane Act

Is Higher Education so Elitist that Undocumented Students Don't Deserve a Chance?
Comment
Outfitting Undocumented Migrants with GPS Devices is a Humane Act