Latina Lista: News from the Latinx perspective > Palabra Final > Immigration > Won’t be long before Arizona discovers Supreme Court did them no favors with SB1070

LatinaLista — Watching Arizona Gov. Jan Brewer deliver her reaction on Monday to the Supreme Court’s decision on the bill that she signed into law — SB1070 — was kind of like deja vu. 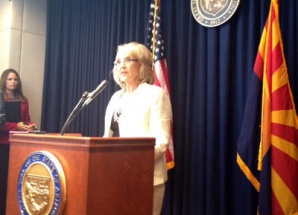 She was thrilled and proclaimed a victory.

“Today is the day when the key components of our efforts to protect the citizens of Arizona, to take up the fight against illegal immigration in a balanced and constitutional way, has unanimously been vindicated by the highest court in the land,” the Republican governor said in a brief press conference. “The heart of Senate Bill 1070 has been proven to be constitutional. Arizona’s and every other state’s inherent authority to protect and defend its people has been upheld.”

All that was missing was a banner behind her proclaiming “Mission Accomplished.”

Unfortunately for her, she has been ridiculed by most for not hearing the fact that the Supreme Court struck down three out of the four provisions and the one it did leave in place remains questionable. But she chose to ignore those facts and acted like the ruling had gone her way.

Her actions are one of the telltale signs outlined in an op-ed a couple of months ago of conservatives bending the facts to meet their truth.

Yet, it’s only her truth.

They are focusing on one particular group of people, Hispanics, and here along the border … it can be pretty challenging to determine who’s here legally and who isn’t,” said Estrada, the sheriff of Santa Cruz County, which flanks Mexico in southern Arizona.

He is among police chiefs throughout the state grappling with the practical aspects of just how to implement the law in a state where there are about two million Hispanics – nearly a third of the state’s 6.5 million people – most of whom are there legally. There were an estimated 360,000 unauthorized immigrants in Arizona as of January 2011, according to government figures.

It’s clear that the remaining law left in place will be challenged again in court and could possibly lead to lawsuits against the state when more legal Latino residents get caught up in the dragnet.

Though Gov. Brewer reiterated her stance that people would not be racially profiled, there’s still fear that some law enforcement officers might manipulate the law by trumping charges against undocumented immigrants.

News like what Sheriff Joe Arpaio tweeted out today: “In the last few weeks deputies have seized over 2.5 tons of marijuana and arrested 28 illegal aliens for drug trafficking,” won’t elicit much trust or credibility among some media and public simply because it will be in the back of everyone’s minds that the law is being bent to meet the goals of AZ law enforcement — capture as many undocumented immigrants as they can, however they can.

In fact, Arpaio is already complaining that the media is ignoring him: “I see that the arrest of two illegal aliens with 50 pounds of methamphetamine was ignored by most of the media including the large newspaper.”

I think it will become clearer to Gov. Brewer and her like-minded supporters that the Supreme Court didn’t hand her a victory after all — but a bigger headache than she anticipated.

Arizona, featured, immigration
Previous Post Rep. Luis Gutierrez plays "pick the immigrant" with congressional colleagues
Next PostVideo: An undocumented young artist envisions a life where she can dream in color

Rep. Luis Gutierrez plays "pick the immigrant" with congressional colleagues
1 Comment
Video: An undocumented young artist envisions a life where she can dream in color