LatinaLista — At one time or another most women and girls in the United States have experienced the occasional unwanted catcall or whistle. As long as the guy committing the street harassment stays in his own (work) zone, it’s easy enough to ignore, but that’s not always the case. 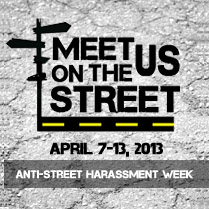 Street harassment can also entail stalking and even rape of stranger on stranger. In countries in South America and Asia where street harassment is unofficially sanctioned by the culture, it can take on much more violating forms from the onset. Whether it’s a hand thrust between a woman’s legs as she walks down a sidewalk, to a slap on the rear to grabbing of breasts on a city bus to eventually a gang rape, street harassment is a serious problem that seems to only be getting worse.

April is Sexual Assault Awareness Month and it’s the season of the year (spring) when there is also an increase in street harassment because of longer daylight hours and warmer temperatures. That’s why, April is a natural month to highlight the global issue of street harassment.

Events around the globe are being planned from rallies to plays to marches. Yet, organizers realize that for the movement to be sustained and carried forward victims need to share their stories, talk to one another, and bounce ideas off of each other on ways to stop the harassment.

So, from Facebook to Twitter (#streetharassment, #endsh), social media is playing an important part of the international campaign to keep people informed of the progress being made to getting people to see each other as equally human.