New list highlights the top 100 NGOs of the world

LatinaLista — According to Wikipedia, the (short) definition of a NGO or non-governmental organization is “a legally constituted organization created by natural or legal persons that operates independently from any government.” The United Nations is credited with coining the term in 1945 to differentiate between organizations that are related to the government and those that are not. 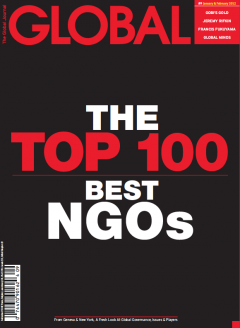 These (USA) NGOs undertake a wide array of activities, including political advocacy on issues such as foreign policy, elections, the environment, healthcare, women’s rights, economic development, and many other issues. Many NGOs in the United States also operate in fields that are not related to politics. These include volunteer organizations rooted in shared religious faith, labor unions, groups that help vulnerable people such as the poor or mentally ill, and groups that seek to empower youth or marginalized populations. Indeed, NGOs exist to represent virtually every cause imaginable.

Those causes even extend to such nebulous issues as “information freedom,” like what Wikipedia is credited with doing on a global scale. So, maybe it shouldn’t be any surprise that Wikipedia, or more accurately, its parent company, Wikimedia Foundation, was selected as the #1 NGO in the world in the first-ever Top 100 international ranking of NGOs by The Global Journal.

For their purposes, the Global Journal editors tweaked the definition of a NGO: “For the purposes of this project, we defined NGOs as operational or advocacy focused non-profit organizations organized on a local, national or international level.”

The countries represented on the list are from every continent with many from the United States, Europe, India, Africa, South America and the Mideast, and the NGOs are all awesome examples of what a person, or group of people, are able to accomplish for the good of society.

The top ten NGOs are: