LatinaLista — While serving in the United States Air Force as a Crash Rescue Firefighter, veteran William H. Moore had his share of close calls but it’s one particular call that he remembers both with pride and regret. 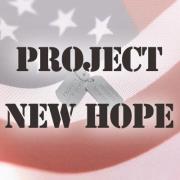 Moore successfully rescued two pilots from a burning F-111. Unfortunately, in the process, he was injured so badly that in 1980 he was discharged honorably with a service-connected disability and granted full disability by the VA in 2007.

Still feeling he had a lot to offer, Moore was impatient to find something he could do for his fellow veterans. It wasn’t long before he found himself in front of the camera doing a TV show for veterans.

Titled Route 9 Veterans Forum Cable Access Show, Moore produces and hosts the show that has a viewership in over 100 Massachusetts communities and even neighboring states. On the show, he and his guests provide veteran viewers with information they may need about accessing services, tapping into community resources, the latest news impacting veterans and the White House initiatives on behalf of veterans.

But Moore wanted to do more. One day while surfing online, Moore came across a website for an organization in Minnesota called Project New Hope. The organization was exclusively for veterans and it provided weekend retreats for them.

Moore liked the idea and in 2011, with a $10,000 private donation, he started the Massachusetts branch of Project New Hope — with a twist.

Building upon the concept of weekend retreats, Moore tailored each retreat to a theme — women veterans, male veterans, veterans and families.

“The military offers retreats too,” Moore told Latina Lista. “But you’re wearing your uniform and it’s run like a military program. Project New Hope is more casual. Everybody has a little anxiety about coming (to the retreats) because we have a lot of different cultures but by the end of the retreat, everyone feels like family.”

The retreats are opened to all eras of combat veterans where rank takes a backseat to bonding over their common experiences. The emphasis is on reconnecting with civilian life, spouses and families. Sports, activities and workshops are staffed by volunteers who are professionals, and who may have some military connection. The workshops range from yoga and meditation to special workshops for children of veterans to counseling sessions.

Children are taken care of by volunteers so the adults can focus on their sessions and reconnecting with one another.

The retreats are free to every veteran and his/her family. All expenses are covered except for travel to and from the retreat. Usually, they’re held at lodges on working farms set in the picturesque New England countryside, free of distractions and everyday stresses.

Project New Hope Inc. spends about 75% of our time helping singles and couples with their communication skills, when Veterans come back from overseas, they don’t have the communication tools to talk to their spouse about their pain, their frustration, their grief.

…We realize the process of healing and understanding is a vital component to life success after war. Each family member will deal with what has happened in their own way. Returning solders face the challenge of transition from war footing, to civilian home life. Often, it can seem as though they’re in it alone, as though people expect them to pick up where they’d been, as though nothing had changed during their time away.

Moore says his chapter held from 6-7 retreats last year and served 191 veterans in 2011 and he hopes to double that in 2012. In fact, the retreats have become so popular that attendees usually come back as volunteers to help out their fellow servicemen and women.

He gets word out about the retreats through Twitter, Facebook and word-of-mouth. He’s also on a mission to expand news of the retreats in other languages, like Spanish. He’s working with a Spanish-speaking veteran to create online videos talking about Project New Hope and the retreats.

Moore secured non-profit status for his chapter and envisions expanding it beyond Massachusetts since word of his retreats has been attracting veterans from as far away as New Mexico.

However, according to Moore, each retreat costs about $3000 to put on which means that donations are always in his bucket list of things to do. But he doesn’t mind. After all, the retreats are for the men and women who sacrificed so much for the country and he feels it’s the least he can do to help them readjust to everyday life.

“The retreats are therapeutic for myself,” Moore confessed. ” I would put on a retreat every month if I had my way.”