LatinaLista — This year is the 20th anniversary of the passing of Cesar Chavez. Unfortunately, while many gains have been made for farmworkers, there still remain injustices that current farmworkers face every day. Like Chavez, who exemplified peaceful protests, today’s farmworkers want to not only commemorate his birthday this month but also carry on the work he started by staging marches in seven key agricultural areas on the West Coast.

The following is a request from the United Farm Workers: 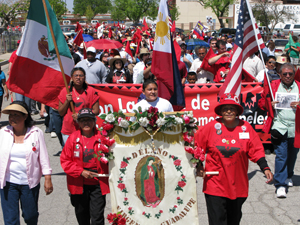 On the weekend of March 23-24, a week before Cesar’s Easter Sunday birthday, the UFW will be holding seven marches in key agricultural areas. Tens of thousands of farm workers up and down the west coast will be marching to continue Cesar’s vision of justice, dignity & respect in the fields. Just to pay for permits and hire buses so farm workers from the surrounding communities have the chance to attend, it will cost more than $56,000.

Yet as much as we’ve achieved in our long history – both while Cesar was alive and since his death – there’s still much for us to do. Cesar himself declared that if the movement didn’t survive his death, then his work would have been in vain. We can uphold Cesar’s remarkable legacy. Can we count on your donation today to help farm workers hold these marches?