MEXICO CITY — Just when the presidential campaign was getting as boring as it can be, a bunch of university students raised their voices. 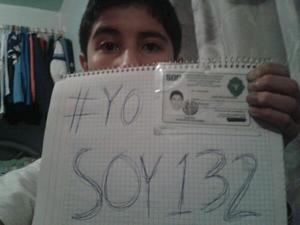 Enrique Peña Nieto, candidate of the PRI party, the one that ruled Mexico for decades until 12 years ago, went to the Iberoamericana University, a private university, to talk to students. His team acted like that old PRI, a lot of guards, tension, not fun.

Finally the students started with the “wrong” questions: about police abuse, corruption, etc… Peña had to sneak out the back door. Terrible mistake. The students followed him until he got in his big van.

Hours later, the leader of that party, Pedro Joaquin Coldwell, suggested, in front of an open microphone, that those were not students, but people paid by other political parties. Offended and angry, the students recorded a video showing their credentianls, they were 131 students who claimed to be that: university students.

From that moment, the movement #YoSoy132 started.

The students woked up and so did all of Mexican society. Suddenly different universities, public and private, walked together asking mostly for two things: clear and open information in every media (newspaper, tv, radio, web) so there can be an informed vote.

There are now a lot of videos, much more demands, and many more people following their example.

I like to stay with the original demand: open, objective, impartial information.

Although all of us that work in media know that being impartial is utopic, we can establish new or revised rules of how to process information. Code of ethics, open spaces in print, web, and electronic media, listening to people — and not only to the big players — explaining, analyzing, remembering, checking, writing.

Somehow, it is going back to what we expected when we studied journalism in school, when we lived searching for Utopia.
I´m willing to do it again.

At my paper, 24Horas, we stablished a working code and a manual for Twitter and Facebook, both are public documents available on our web page. We do a lot of fact-checking, in-depth, interesting interviews, review old data to compare and analyze.

For all those involved with #YoSoy132, and every young Mexican, who’s voting for the first time, if they take two minutes to think who to vote for, and really do it, the movement will be a big, huge success.

Martha Ramos is a 24-year career journalist based in Mexico City. Throughout her career, Martha has covered a range of issues from the economy, social justice, women’s issues, politics and social media. She is the Managing Editor of 24 Horas.

featured, media, Mexico, students, unbiased
Previous Post Latina Cubicle Confidential™ “What Are You Saying? I Can’t Understand You”
Next PostNew education report shows while school has changed, it remains the same in putting Latinos and blacks at risk for failure

Latina Cubicle Confidential™ “What Are You Saying? I Can’t Understand You”
2 Comments
New education report shows while school has changed, it remains the same in putting Latinos and blacks at risk for failure