LatinaLista — Today, September 21, 2011 is the U.N. declared International Day of Peace. If ever there was a time in our planet’s history that peace was needed, it’s now. 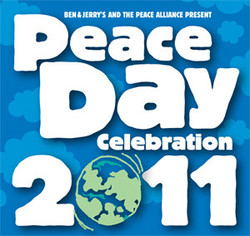 Though war rages on in other countries, the most logical place to start advocating for peace is with our own government. To start reaching out to Congress, volunteers with the Peace Alliance and other peace building groups spent yesterday afternoon scooping free Ben & Jerry ice cream for members of Congress to get their support on three specific peace-building initiatives.

There is a petition in support of these initiatives at Change.org that people are urged to sign to show Congress that the American public wants peace, not just rhetoric.

The peace initiatives are:

1. Enact the Youth PROMISE Act (HR 2721), groundbreaking, bipartisan legislation that will provide communities with transformative support to prevent youth violence. In the nation’s most violence-ridden communities, the legislation will provide a lifeline for our nation’s greatest asset: our young people.

2. Rapid Response Funding: In late 2007, Kenya erupted into violence after disputed elections. The State Department wanted to support the African Union mediation process, but did not have unprogrammed funds available. Congress should fully fund the Complex Crises Fund at $75 million, a flexible pool of money to allow the State Department and USAID to respond quickly to emerging crises.

3. The United States Institute of Peace helps prevent and mitigate deadly conflict in places like Iraq, and by educating the U.S. public on peacebuilding and conflict resolution. Investing in USIP will help the U.S. save lives and treasure in the long-run by preventing wars rather than fighting them. Congress should fully fund USIP at $43 million.

In these economic times, it’s hard to justify spending on programs that don’t directly create jobs or put food on the table for millions of Americans. Yet, any program that can save lives in the long-run and teach us all how to live with one another, respect each other’s beliefs and value life is money well spent — and a far better investment than equipping our forces with new guns, uniforms and body bags