Many times a child being bullied is like a duck floating along a pond as predators swim below. They struggle to appear calm and unruffled on the surface, but below where no one can see they are paddling like mad, consumed with fear.

Bullying is not as rare an occurrence in the contemporary world as it was 20 or 30 years ago. The growing diversity among schoolchildren today, as well as, the emergence of new digital social venues are two large examples of why this is true. 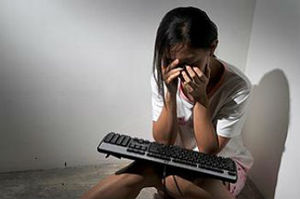 The growth and popularity of social networking sites such as Facebook among today’s youth has only provided another public avenue for a bully to continue his or her torment after school hours. Cyberbullying, as it has been dubbed, is and has been one of the most ferocious and unrelenting forms of bullying in the 21st Century.

While no child is excluded from the possibility of being bullied, those who possess considerable differences from the majority of their peers are significantly more susceptible. For young Latina youth, having a different culture, religious practice and many times language, presents numerous challenging differences for them to face within mainstream American culture.

The young Latina said in one incident a schoolmate called her a “damn Mexican” during a school bus ride. Torres, who is originally from Puerto Rico, has been a United States citizen her entire life. Her father said the law was indirectly creating a culture in their state where bullying Latinos was OK.

According to the U.S. Census Bureau, the Hispanic population increased by 15.2 million people between 2000 and 2010, accounting for over half of the 27.3 million increase in the total population of the United States. Young Latinas are the largest group of minority girls in the country and represent the fastest growing youth population. Alarming trends, however, show that young Latinas have the highest high school dropout rates and attempted suicide rates.

Communities have stepped up to the plate to help eradicate these dismal statistics. Many after-school programs and organizations offer support and education to these minority youth about how to be successful and avoid things such as cyberbullying and how to speak out when they see a friend or peer being bullied.

Austin-based Latinitas is one such organization fighting to help end cyberbullying and bullying altogether. The non-profit organization was started in 2002 and is dedicated to empowering young Latinas through media and technology.

Latinitasmagazine.org is also the first digital magazine created for and by Latina youth. The organization provides access for productive and positive interaction via the Internet and social media, as well as offering media literacy lessons on cyberbullying.

“[Latinitas] teaches us how to avoid [cyberbullying] and how not to start it,” said one anonymous member of Latinitas at a weekly organization meeting. Seventy-three percent of young girls aged 8 to 14 who were asked about cyberbullying at the meeting said that they considered it a problem for the students at their schools.

Because cyberbullying can be committed from any electronic device that can access email or social media, it means that young people from low-income households who don’t have home computers are no longer safe from cyberbullies.

The Pew Hispanic Research Center found that teens from low-income households are much more likely than other teens to go online using a cell phone. This means that some Latinas being bullied will be the focus of Facebook slams, sexting and bullying via text messages.

“The stress levels of young Latinas play a big part in bullying, as bullying is often an outward projection of one’s own low self-esteem,” said Gonzalez. “Unfortunately, a lot of that strife would potentially be projected on their peers through emails, posts and comments.”

Cyberbullying among Latina youth is a crucial and pressing issue laying bare the realities of a highly underrepresented and unheard segment of the population. Addressing the issue head-on, by implementing more afterschool programs and cyberbullying-awareness education classes nationwide, could mean the difference between failure and success for these struggling adolescents.

Kristina Kenney, originally from Bridge City, Texas, is a mass communication graduate student at Texas State University working toward a Master’s degree in New Media Communication. Recently she has been studying and conducting research on Latino portrayals and representations in mainstream media.

featured
Previous Post Modern Alchemy’s Secret to Longevity: The Truth about Sugar
Next PostUNICEF report shows teens in the Americas face their share of challenges

Modern Alchemy’s Secret to Longevity: The Truth about Sugar
1 Comment
UNICEF report shows teens in the Americas face their share of challenges